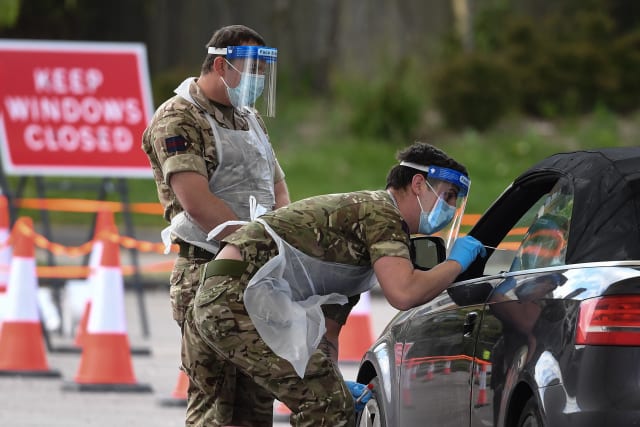 The Government has said it met its target to carry out more than 100,000 tests a day by the end of April.

Here’s a look at how ministers claim to have done it.

– What did the Government originally promise?

On April 2, after several days of intense scrutiny over failures in testing, Health Secretary Matt Hancock set a target of achieving 100,000 daily coronavirus tests in England by the end of April.

His pledge included antigen tests that tell people whether they currently have Covid-19, as well as antibody tests to see whether people have previously had the infection.

– What is the Government saying?

Mr Hancock announced at Friday’s afternoon press conference that the Government had met the target, and heralded it as an “incredible achievement”.

He said 122,347 tests were performed in the 24 hours up to 9am on Friday, adding that testing would help “unlock” the UK’s lockdown.

– How did the Government reach the total?

Of the 122,347 tests performed, 27,497 were home kits delivered, according to the Government’s testing tsar Professor John Newton.

He said a further 12,872 tests were delivered through the Government’s satellite process – where test kits are delivered to centres such as hospitals and NHS sites.

The remainder were carried out in laboratories.

– Has the Government moved the goalposts?

The overall total also includes tests dispatched to “satellite testing locations” – such as hospitals that have a particularly urgent need – but does not detail whether the tests have actually been used.

It means the number of tests known to have been carried out in the last 24 hours, as opposed to delivered, is 81,978.

Guidance on the Government website appears to have changed on April 28 to include wording saying home tests and satellite tests were being included.

Prof Newton told reporters there had been “no change” to the methodology but said advice had been sought on counting as “new ways of delivering tests” were brought in.

– What does Labour think of it?

“But many would have expected the 100,000 promise to have been met by actually carrying out testing, not simply because 39,000 kits had been mailed out.

“The headline figure shouldn’t count tests that hadn’t been used, or indeed, might never be used as a completed test. Ministers promised transparency – the public and NHS staff deserve clarity.”

– How quickly did the testing ramp up?

When the Government set the target, only around 10,000 tests were being carried out each day.

On-screen kissing could return after publication of new safety rules