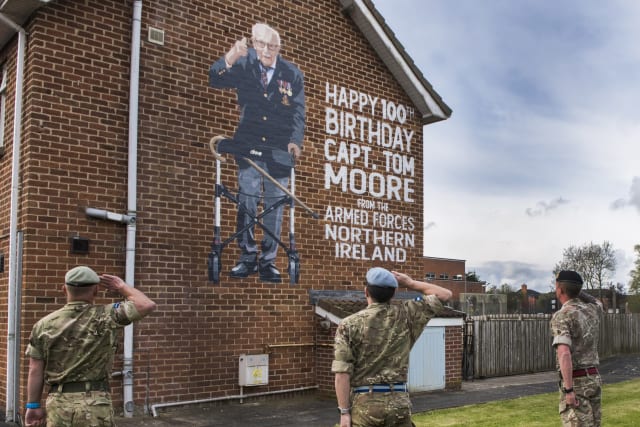 Soldiers in Northern Ireland have saluted Captain Tom Moore on his 100th birthday with a 14-foot mural.

As the remarkable war veteran reached 100 after raising millions for the NHS, he was immortalised at Aldergrove Flying Station in Co Antrim.

Captain Tom captured the hearts of the nation during the coronavirus crisis by walking 100 laps of his garden, raising almost £30 million for NHS charities.

He explained he had been working with Belfast Mural Arts on another project when they donated this art work free of charge.

“Having watched the amazing achievement from Captain Tom over the past few weeks and the way in which he conducted himself, with great humour and enthusiasm, we wanted to pay tribute to him on his 100th birthday as a fantastic example of selfless service to the nation,” he said.

“Happy Birthday Captain Tom, on behalf of the Armed Forces in Northern Ireland,” he said.

“You are a gentleman, a true hero and the living embodiment of our army values and standards. Many happy returns.”