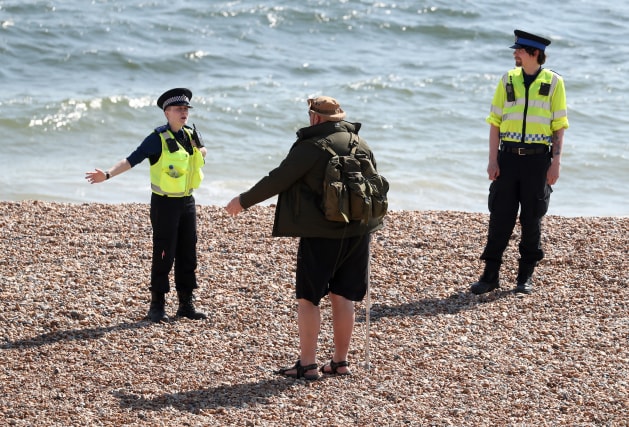 More than 9,000 fines have been issued for flouting Covid-19 lockdown rules as police warn people will get “restless” stuck at home with summer approaching.

Data released by the National Police Chiefs’ Council (NPCC) on Thursday shows 8,877 fixed penalty notices (FPNs) have been recorded by forces in England between March 27 and April 27, while 299 were issued in Wales over the same period.

Deputy Chief Constable Sara Glen said reports of anti-social behaviour more than doubled to around 215,000 in the four weeks to April 27, compared to about 106,000 in the same period last year.

But she said enforcement of the Government’s restriction of movement regulations remains relatively low with more than 200,000 coronavirus-related calls received and just 0.02% of the population issued with a fine.

NPCC chairman Martin Hewitt said police face a different challenge when regulations are relaxed and more people are allowed out of their homes.

“There’s an inevitability that as the weeks progress, this is harder for people and we are moving into warmer weather and I think everyone would accept that,” he said.

“I think it’s inevitable that people will get restless.

“This is now quite an extended period of time.

“This is hard on everybody adapting their lives.

“We would assess that over the weekend we sensed across the country a little bit more traffic on the roads and a few more people out and about.

“But having said all of that, we are still seeing the same level of compliance from people.”

Police have been given powers to hand out a £60 penalty, that is reduced to £30 if paid within two weeks, for breaches of the lockdown rules, with the fine doubled for each repeat offence up to a £960 maximum.

Of the 43 regional police forces in England and Wales, Thames Valley Police has recorded the highest number of fines, with 649, while Warwickshire issued the fewest, with just 22.

Ms Glen said younger people were more likely to breach the lockdown rules, with figures showing around eight out of 10 people fined were men, a third were aged between 18-24 and another third aged 25-34.

“The vast majority of the fines that we’re seeing enforced are people actually not complying, being out in public spaces where they don’t have a reasonable excuse to do so, not listening to the officers’ advice in respect of engaging and explaining to the extent where the officer then has to issue a ticket to secure compliance,” she said.

“There are some definite correlations when it gets hot and when it is good weather where we see troublesome spots, whether that’s beaches or whether that’s countryside, rural communities where people want to go and walk.

“We definitely have seen that when we’ve had hot weather, but on the whole, we are seeing, as soon as officers arrive as soon as they engage and explain, the vast, vast majority of the public are adhering to the rules.”

This is a resort for birds