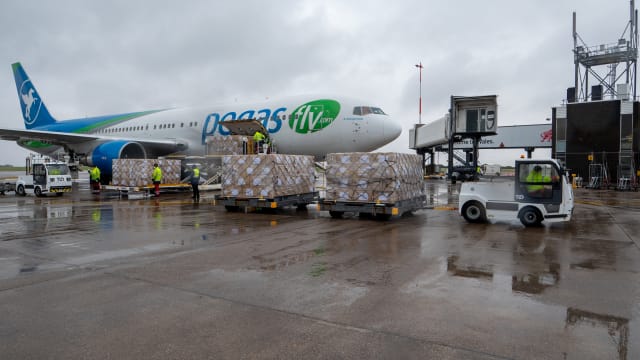 A chartered flight carrying 200,000 fluid-resistant gowns has touched down in Wales after setting off from Cambodia on Tuesday.

The flight is the first of two due to arrive this week, replenishing supplies of the gowns for NHS and social care staff in Wales.

In total, 660,000 fluid-resistant gowns will be flown into Cardiff Airport from Phnom Penh in Cambodia and Hangzhou in China this week.

Speaking at a press conference in Cardiff, Health Minister Vaughan Gething said personal protective equipment (PPE) had been a “particular worry area” for the Welsh Government.

Mr Gething said the nation was “going through” between 40,000 to 50,000 of the gowns per week, meaning Tuesday’s flight had brought a four-week supply.

On Saturday, a shipment of 10 million masks also arrived in Wales from China.

First Minister Mark Drakeford said: “Since the start of the pandemic, we have been working very hard to make sure we continue to get the right supply of PPE for Wales.

“Coronavirus has put supplies under pressure around the world. Today’s flight is the result of a lot of hard work behind the scenes to secure new supplies of gowns for our frontline workers.”

Reservists from 3 Royal Welsh, who are headquartered at Maindy Barracks in Cardiff, unloaded the PPE from the plane after it touched down at the airport.

On Tuesday, Public Health Wales (PHW) said a total of 813 people had died after testing positive for coronavirus – an increase of 17 on Monday’s figures.

A further 232 people also tested positive for Covid-19, bringing the total number of confirmed cases in Wales to 9,512.

Dr Giri Shankar, incident director for the outbreak’s response at PHW, said: “Based on the new case numbers there is emerging evidence suggesting a levelling-off in the number of new cases of novel coronavirus in Wales, which may be an indication of the effectiveness of lockdown measures.

“However, it is still too early to tell for sure, and it is too soon to end the current social distancing rules.”

Dr Shankar also confirmed that data supplied by the Hywel Dda University Health Board had not been consistent in reporting deaths relating to coronavirus.

A Welsh Government review found that Hywel Dda, which covers west Wales, had failed to report 31 deaths to PHW officials.

The report was ordered last week after it emerged that 84 deaths had not been reported by Besti Cadwaladr health board.

This means a total of 115 deaths across north and west Wales were not initially included in the country’s official statistics.

PHW said the 31 deaths from Hywel Dda would be included in data published on Wednesday.

The review document found there was a “lack of consistent approach” in how health boards across Wales reported deaths, leading to a “risk of divergence and inefficiency”.

Mr Gething insisted that all would now use the same reporting method.

“That should then mean that from the figures today and tomorrow we’ll be fully up to date,” he said.

Angela Burns, the Welsh Conservatives shadow health minister, called on the Welsh Government to “embed a culture of compliance” with reporting protocols.

“We’re told that the electronic form for notifications of deaths is either not being signed off or implemented across all health boards,” Mrs Burns said.

“This has led to – at Hywel Dda – a consistent undercount over the period of the pandemic.

“The lack of conformity in reporting that is likely skewing results and the action to be taken to combat coronavirus.”

She said clinicians may not have known about new guidance on reporting Covid-19 deaths, introduced a month ago, or may have been “so overworked” that they may have missed including the deaths.

Rhun ap Iorwerth, of Plaid Cymru, said people needed to be given the “full picture” of how many people had died with coronavirus.

“People have to trust the data. That trust has been dealt a big knock and it can’t be allowed to continue,” he said.

On Tuesday, Mr Gething said the testing capacity for Wales had reached 2,000 per day.

From Thursday, a web-based booking system will be available for those booking a test at drive-through centres in Cardiff and Newport.

It will then be rolled out to other parts of Wales.