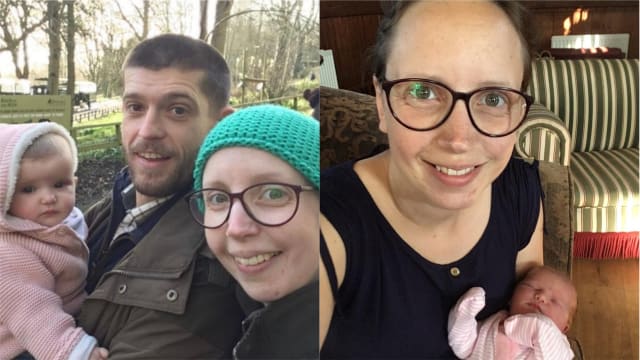 A mother with terminal cancer is asking for permission to travel to the US amid the coronavirus lockdown so that she can receive potentially life-saving treatment.

Sarah Wright, nee Gray, 33, was told her breast cancer had metastasised and was incurable, in August last year, the month after she gave birth to her daughter Everleigh.

Mrs Wright, a finance assistant from Ashford, Kent, has now been accepted on to a trial for a promising new drug, leronlimab, which could save her life if she can travel to a San Francisco clinic in California.

However, as of March 16 travel to the US from the UK has been severely limited, preventing the family from travelling.

“It feels like an utterly helpless situation, a situation where everything is out of your control,” Adam Wright, Sarah’s husband, told the PA news agency.

“I would never wish for anyone to experience what we have over the last year.”

The couple discovered Mrs Wright was pregnant and had triple-negative breast cancer in the same week in November 2018.

After a pregnancy interspersed with rounds of chemotherapy, Mrs Wright gave birth on July 2, before being told cancer had spread to a lymph node behind her sternum, her liver and lungs just weeks later.

The family has since tried a series of treatments in an attempt to save Mrs Wright, including a clinical trial on atezolizumab at Maidstone Hospital and most recently five sessions of carboplatin chemotherapy treatment.

In April this year, the NHS told Mrs Wright it could no longer help her, so Mr Wright contacted the clinic in San Francisco and started a social media campaign, #SaveSarahGray, to encourage leaders to allow her to travel to the trial.

“When we had the final piece of bad news from our oncologist a couple of weeks ago it was time for me to act.

“I started the Twitter and Facebook campaign to try and regain some control or at least the feeling that we are doing something.”

The family is also exploring the possibility of Mrs Wright being able to receive leronlimab in the UK through their oncologist.

The drug, which is also being tested as a cure for Covid-19, is not currently available as a cancer treatment on the NHS but is occasionally used for HIV patients.

Asked what he would say if he could speak directly to the leaders who can help their situation, Mr Wright said: “I would beg for their help.

“They aren’t just helping me and Sarah they are helping to give our daughter Everleigh her mum back, if that isn’t enough of a reason for someone then I don’t know what would be.”

The family have also contacted their local MP, Damian Green, who they say is “on the case” with Parliament and the UK’s ambassador to the US.