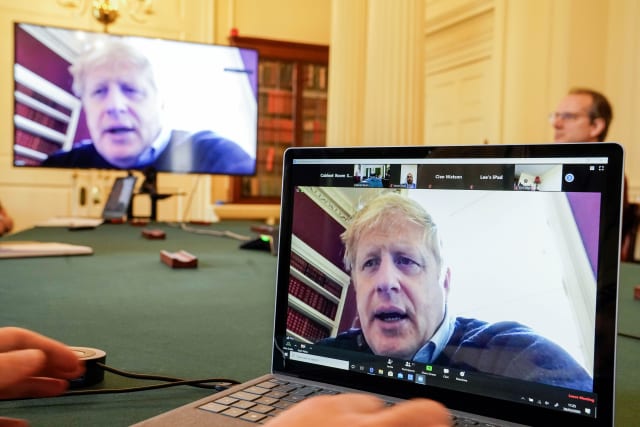 The Prime Minister is due to resume work on Monday and will chair the morning meeting of the Government’s coronavirus “war cabinet”.

Here is a timeline of Mr Johnson’s battle with the virus – from “mild symptoms” to a week in hospital.

Later, Mr Johnson thanks NHS staff at St Thomas’ for saving his life, saying in a short statement: “I can’t thank them enough. I owe them my life.”

Mr Johnson is discharged from hospital and will continue his recovery at Chequers, where he will be taking a break from work, a Downing Street spokesman confirms.

Speaking in a video released shortly after he was discharged from hospital, Mr Johnson thanks the NHS – saying there was a 48-hour period when things “could have gone either way”.

The Prime Minister’s official spokesman says that Mr Johnson is receiving daily updates on the Government’s response to the coronavirus crisis, but is not working.

“He has been receiving updates on the coronavirus response, and he has spoken with the First Secretary of State, as well as senior members of his Number 10 team,” the spokesman told a Westminster briefing.

In a phone call with US President Donald Trump from his Chequers country retreat, Mr Johnson says he is “feeling better”.

The White House reveals that Mr Johnson “shared that he is feeling better and on the road to recovery” during the call.

In a sign the PM is making a gradual return to work, Downing Street says the two leaders discussed the need for an international response to the pandemic and a post-Brexit trade deal.

Mr Johnson holds a telephone audience with the Queen from Chequers, in his first conversation with the monarch in three weeks.

The Prime Minister returns to Downing Street after recovering from Covid-19 at his country home Chequers.