Royal family leads the way during weekly clap for carers

The royal family led the way during Thursday night's clap for carers, the weekly tradition to show appreciation for NHS staff and those working on the front lines of the coronavirus pandemic.

The Duke and Duchess of Cambridge and their three children, Prince George, Princess Charlotte and Prince Louis, joined the UK for the fifth week in a row, to praise everyone from NHS workers to teachers who are continuing to work during the lockdown.

The family took to their doorstep at their Norfolk home, Anmer Hall. 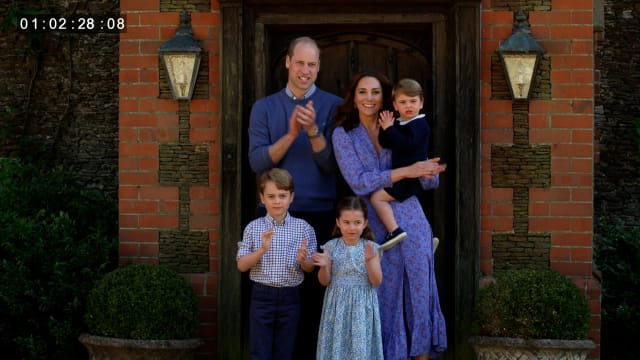 The Prince of Wales and Duchess of Cornwall, who are currently staying at their Scottish home Birkhall, also took part in the clap.

The Duke of Cambridge appeared in a comedy skit with Stephen Fry prior to the 8pm clap.

During the exchange, he said that homeschooling his children had proved "a bit of a nightmare, really".

He added: "By the way, have you seen anything good on TV? It's hell without EastEnders."

Before getting up to take part in the clap for carers, he said: "On my way, let me just see if I can find my socks, and my shoes, and my trousers."

Footage of the duke clapping outside his home with his family was then aired as the clap for carers began.

Kate Garraway, whose husband is in a critical condition after testing positive for the virus, also took part in the clapping.

She posted on Instagram: "Another emotional #clapforcarers and never has it been more needed.

"None of those keeping my Derek alive have ever made me feel it's a chore, they want to win this as much as I want them to, but it must be so hard. He is still critically ill in intensive care, but where there is life there is hope. Thank you #nhs from the bottom of my heart."

The weekly tradition was started by Dutch national Annemarie Plas, a 36-year-old mother of one who originally thought her show of support for frontline workers might end up being just her and a few friends sharing a moment on FaceTime.

She told the PA news agency: "I was inspired by what was happening in my own country and I thought it would be good to have it here too."