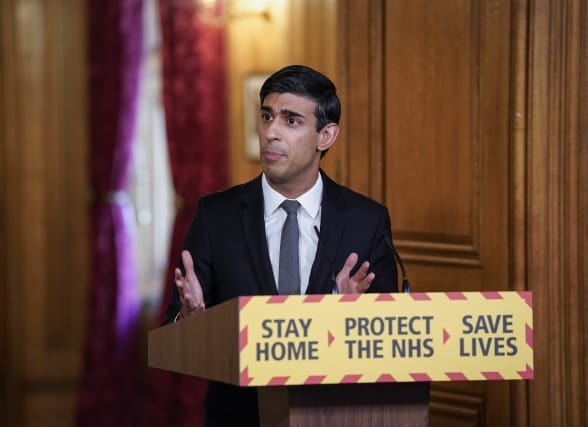 Britain’s economy may shrink by 35% between April and June this year, the fiscal watchdog has said as the Chancellor warned there would be more tough times ahead in the coronavirus pandemic.

The Office for Budget Responsibility (OBR) said unemployment could hit 3.4 million, leaving around one in 10 of the working population without a job, while the UK economy could fall off a cliff edge.

Rishi Sunak said not every business or household could be protected, but that a “bounceback in growth” was expected when the crisis eases.

The warnings came as:

– Data from the Office for National Statistics (ONS) shows Covid-19 was mentioned on 3,475 death certificates in the week ending April 3, including hospital, care home and community deaths.

– Sir Simon Stevens, chief executive of NHS England, is reported to be the latest senior figure leading the UK’s response to the crisis to have suffered from coronavirus. The BBC said he had self-isolated for just over a week.

– The Department of Health said 12,107 patients have died in hospital after testing positive for the virus in the UK as of 5pm on Monday, up 778 from the previous day’s total, while confirmed cases reached 93,873.

In its first estimate of the economic toll taken by the crisis, the OBR said public sector net borrowing is expected to increase by £218 billion this year, compared with March forecasts, hitting £273 billion, or 14% of GDP.

“That would be the largest single-year deficit since the Second World War,” the independent forecaster said.

It based the outlook on a scenario where the lockdown lasts three months followed by a partial lifting for three months, but said, in this case, that there would be a sharp bounceback in the economy, with gross domestic product likely to jump 25% in the third quarter and a further 20% in the final three months of 2020.

Mr Sunak told the daily Downing Street press conference: “These are tough times and there will be more to come. As I have said before, we cannot protect every business and every household.

“But we came into this crisis with a fundamentally sound economy, powered by the hard work and ingenuity of the British people and British businesses.

“So while those economic impacts are significant, the OBR also expects them to be temporary, with a bounceback in growth.”

He also said the Government would not choose between the economy and public health, as “common sense tells us that doing so would be self-defeating”.

“At a time when we are seeing hundreds of people dying every day from this terrible disease, the absolute priority must be to focus all of our resources – not just of the state but of businesses and all of you at home as well – in a collective national effort to beat this virus,” Mr Sunak explained.

It came as new figures showed more than one in five deaths recorded in England and Wales are now linked to coronavirus.

In the week to April 3, some 16,387 people died in England and Wales, an increase of 5,246 deaths compared with the previous week and 6,082 more than the five-year average.

Covid-19 was mentioned on 3,475 death certificates in the same week, including hospital, care home and community deaths.

But care home providers have warned they are seeing a higher number of cases and deaths than are officially reported, in part due to a time lag with the ONS figures.

The Department of Health and Social Care told the PA news agency on Tuesday lunchtime that there had been coronavirus outbreaks at 2,162 care homes in England.

On including care home deaths in statistics, Mr Sunak said: “In terms of the data, there’s absolutely no desire not to respect what’s happening in care homes and to provide that data… actually working with the ONS to speed up the publication of that data.

“In terms of the data that we publish every day and make decisions on, I think there, there is a question about making sure we have a data set that is consistent and accurate and timely and I think there is (a) logistical challenge in being able to collect that data and then make decisions based on it.”

Lesley Manville joins The Crown: ‘I could not be happier’