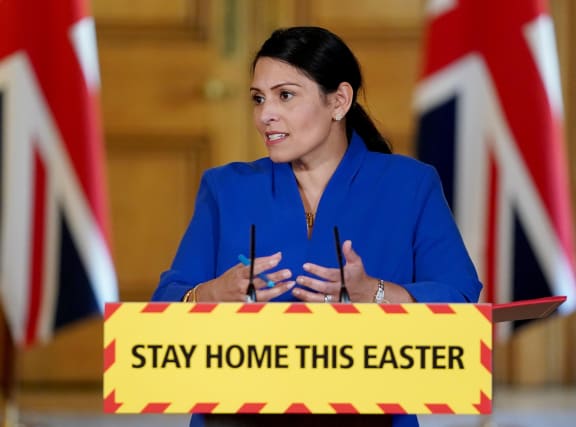 The Home Secretary has warned people not to blow the police enforcement of coronavirus rules out of proportion based on a few social media posts.

Priti Patel said that the majority of police officers were following the guidance “really well” but would be “unafraid to act” if people put lives at risk by not doing the right thing.

Speaking at the Downing Street press conference on Saturday, Ms Patel said people flouting the social distancing measures by having garden parties and house parties were “going against the grain” of the new rules.

Ms Patel added: “The majority of police officers around the country are following the guidance really well.

“We have seen one or two instances, we shouldn’t allow a few social media posts to blow out of proportion the way the guidance is being put in place and enforced.”

Ms Patel said that the “overwhelming majority” of people were making “their own sacrifices”.

She added: “But my message to anyone still refusing to do the right thing is clear: if you don’t play your part, our selfless police – who are out there risking their own lives to save others – will be unafraid to act.

“Their work is helping our doctors, our nurses, our healthcare workers to fight the virus and to save lives.

“If you don’t follow the guidance, you will be endangering the lives of your own friends, family and loved ones.”

When asked whether an increase in breaches could lead to stronger police powers, Ms Patel said the powers will be kept under review.

Chairman of the National Police Chiefs’ Council (NPCC) Martin Hewitt said that as of Thursday a total of 1,084 fines for breaches of coronavirus regulations in England and Wales had been issued across 37 different forces.

“Across all of those forces, that is an average of less than 84 a day,” he added.

“This shows that the overwhelming majority of people are abiding by the rules and are staying at home to protect the NHS and save lives.”

Mr Hewitt also said that forces had seen a 21% fall in overall crime across the last four weeks compared to the same period last year.

But Ms Patel said that the virus was changing the nature of the threat the UK faces from crime with fraudsters using the virus as a “hook” to scam more than £1.8 million from victims.

She also said that the National Domestic Abuse Helpline reported a 120% increase in the number of calls it received in one 24-hour period.

Ms Patel announced a campaign to provide support for those at risk of domestic abuse and said that up to £2 million would be provided to “enhance online support services and the helplines for domestic abuse”.

She added: “I’m launching a new national communications campaign to reach out to those who are at risk from abuse, highlighting that they can still leave home to get the support that you need.”

Mr Patel said the service will signpost victims and is aimed at providing reassurance, and added it would be symbolised by a hand print logo embossed with a heart.

She added that while perpetrators should be the ones to leave homes, the Government will work to ensure there is refuge for victims and their children if this is not possible.

The Home Secretary said: “Our priority is to get the abusers out, but sadly this is not always possible, so, where a victim and their children do need to leave, we will ensure that they have a safe place to go to.

“And that’s why we are looking at alternative accommodation to support those in need at this difficult time.”

Your dog will love this smart crate