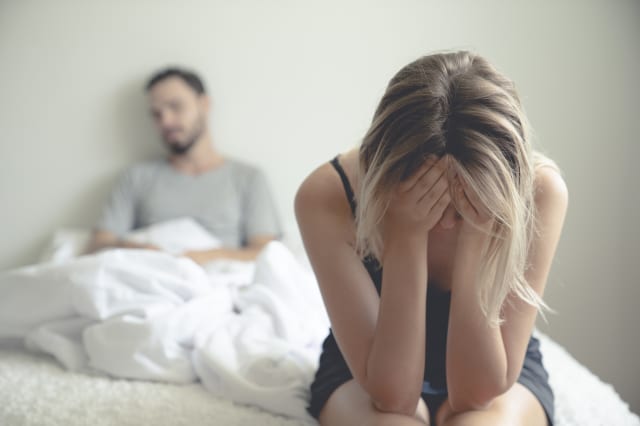 It's easy to dismiss your headache as a result of too much coffee, or your anxiety as nervous butterflies. But your body could be telling you more than you realise about your environment and the people in it.

Our bodies can sometimes show us what our subconscious has become aware of, but our cognitive mind may not yet have realised, according to therapist Shannon Thomas. She said many of her clients who were in abusive or toxic relationships ended up experiencing physical symptoms, with no obvious medical explanation.

"I don't know of a client yet who hasn't experienced some sort of body reaction to being in an abusive relationship," Thomas said. "There are varying degrees, it's a wide spectrum, but every single person had some physical manifestation of the abuse."

People often stay with abusive partners because of something called trauma bonding. This is essentially when the abuser sends their partner on a rollercoaster, with punishment and then intermittent reinforcement of kindness when they "behave". This means the body is going through its own turmoil, with high levels of stress hormones adrenaline and cortisol, paired with dopamine when given affection as a reward.

"There's a high level of adrenaline and cortisol going on," Thomas said. "And when you have that combination of a chemical rush in the body, the body is going to react to it."

One common symptom of a bad relationship is feeling constantly tired and worn down. And usually this is the abuser's goal, because a worn out victim is much less likely to have the energy for a fight, and is thus more easily controlled.

"The high moments feel really good but when those downward spirals start, the gaslighting or the silent treatment, the body can go into a crash," Thomas said. "And it's that up and down and up and down that wears on survivors."

She said when you look at before and after pictures, people go from having dark circles under their eyes and withdrawn facial features, to having a vibrancy again.

"Our environment really can poison us," she said.

This poisoning over time can end up in auto immune issues like inflammation, body aches, and skin flareups. But Thomas said in about 95% of cases, when her clients went to doctors about these problems they came back with a clean bill of health.

While an all-clear from a physician is usually good news, it's also distressing for the patient, because they know their symptoms are real — there just isn't a medical explanation.

It can also play into the abuse and gaslighting, if their partner is constantly telling them they're making things up for attention.

"In a hidden toxic environment, I always correlate it to clear poison in water, you don't see it until you become sick," said Thomas. "We can rationalise our thoughts, we can say it's just because we're working a lot, or because you have a lot on. But the body isn't going to make these excuses."

People in bad relationships often find they have trouble with certain foods, when they used to be able to eat anything. Thomas said this is because of all the stress and the cortisol and adrenaline being held within the body.

Anxiety evolved in humans to help us with our fight or flight response — hormones spike to help us either run from danger or face it head on. But if these hormones have nowhere to go, in theory, this means your body may start attacking yourself.

"Even after the relationship has ended it can take time to rebuild from the hole in the valley the mind and body went into during the relationship," Thomas said. "The relationship can be over, and the survivor is still working on their endurance, and getting their physical health back."

4. Trouble with memories and speech

When your mind is on high alert, always watching what you say in case it starts an argument, it doesn't have much space for anything else — including memory and speech.

"I've seen a lot of clients that have a very difficult time reading books or processing new information or holding information or memories," said Thomas. "When they're in the middle of the abusive relationship, these functions are really hard."

It's because the mind is trying to process what's going on, why their partner is being so cruel and manipulative, and working hard to find solutions. The problem is, the abuser isn't looking for solutions.

"You think everyone wants harmony, and psychological abusers do not," said Thomas. "They love the entertainment value of stringing someone along and creating drama, and even if they say they hate drama, they're the ones that thrive off of it ... You have two completely different goals."

It can be the eureka moment for many victims, she said, when they work out the other person isn't working with them, but against them.

"After the abuse is over, the person is learning again to feel confident in what they're saying and what their thoughts are," Thomas said.

"I think that may be part of the recovery process of finding their voice again, that things don't have to be perfect, that they can just speak freely with people and have an ease to their conversation, whereas before they had to pick and choose their words carefully because they were walking on eggshells."

Muscle tightness is a huge indicator that someone is making us uneasy, Thomas said, but still we might rationalise it as nerves.

"I would encourage that you really stop and think 'why is my body reacting this way around this person?'" she said. "Maybe there's something that my subconscious is noticing about this person that hasn't come into my cognitive mind, but my body is sensing it."

We should trust our gut more, according to Thomas, because almost all the clients she has worked with or talked to about psychological abuse initially didn't really like the person who became their abuser.

"Something just didn't feel right but they rationalised it and kept spending time with that person, and that's when the trauma bonding began," she said. "But it's really common that way before any attraction happened there was an initial kind of 'no.' I hear it over and over."

Sometimes the abuser is so charismatic there's an instant spark, but for others their gut was always telling them that this was a person they should steer clear of.

"I think that's what happens when we see them with clear eyes," she said. "The first reaction to them is something's not right, then over time our eyes are distorted ... But that first reaction is the most honest reaction, where they have no attachment to them at all."

Symptoms diminish over time, but sometimes they remain

Often, the psychical symptoms from an abusive relationship diminish when the survivor leaves, but sometimes they can persist. For example, people may find they are more prone to anxiety than before, or their stomach is more sensitive than it used to be.

It really varies from person to person, and depends on age, someone's general health, and how long the abuse went on for.

"There's recovery for everybody," Thomas said. "It's just a question of how much it has to be managed after that abusive relationship."

This electric wheelchair is built for off-road travel