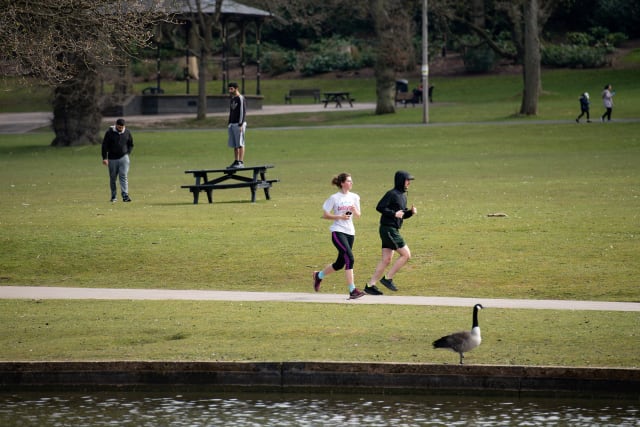 Public sunbathing is not allowed in lockdown, the Health Secretary has said after people were pictured flouting coronavirus rules.

The UK’s second weekend in lockdown is predicted to be the warmest in six months.

Matt Hancock told Sophy Ridge On Sunday: “Sunbathing is against the rules that have been set out for important public health reasons.”

One London park has been forced to close today after thousands of people ignored “stay-at-home” guidance and enjoyed the sunshine or met friends.

Brockwell Park in Lambeth locked its gates indefinitely after 3,000 people visited on Saturday, “many of them sunbathing or in large groups”.

The council called the rulebreakers “unacceptable” and apologised for the closure, adding: “A minority of people have not followed the guidance – regrettably we have to act.”

There were similar scenes on Primrose Hill in Camden, where police moved on more than 100 people who were picnicking or had met with friends.

Rulebreakers were also spotted on the south coast, and two people will now face the courts after a having a barbecue on a beach in Hove.

Sussex Police tweeted that they were “disappointed” in those caught, but said: “Thank you to everyone that stayed away from beauty spots and beaches today.

On Saturday, Cabinet minister Michael Gove said there was evidence that young people were not taking social distancing measures as seriously as others.

Speaking at the daily coronavirus briefing, Mr Gove said: “There has been evidence that for some young people, there has been a lower level of compliance.”

He predicted some parts of the UK “could be seeing 20-21C”, which would be “the first time we’ve reached over 20 since October 1 last year”.