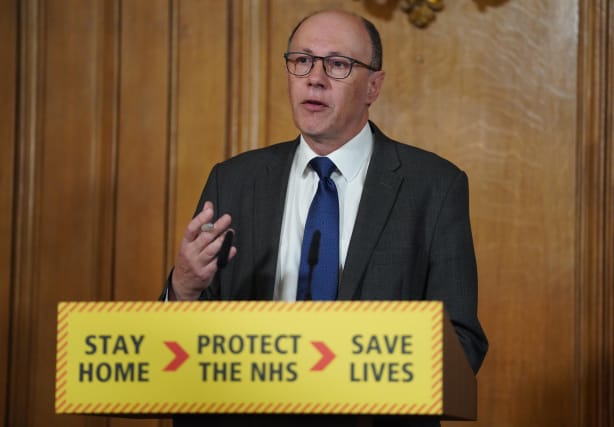 There are “green shoots” signs that the rate at which people are becoming infected with Covid-19 is slowing, NHS England’s medical director has said.

Professor Stephen Powis said the next few weeks “will be critical” to see how the UK epidemic would pan out but there were signs of a plateau in the infection rate.

Some 10,767 people are currently in hospital in England, with 3,915 of those in London and 1,918 in the Midlands, where hospital admissions are accelerating.

Prof Powis said the overall signs were that the “Great British public” were heeding social distancing advice and reducing contact.

Turning specifically to the number of infections, Prof Powis told reporters at the daily Westminster press briefing: “We have had a rise in the number of new UK cases but recently there is a little bit of plateau.

“It’s really important not to read too much into this.

“It’s early days, we’re not out of the woods, we’re very much in the woods.

“The number of infections is not rising as rapidly as it once was.

Prof Powis said the rate of hospital admissions was still increasing, as was expected at this stage of the epidemic.

However, he said that if the number of infections started to drop, then in the next few weeks the “hope” was that the number of admissions would also begin to fall.

In the last few days, around 1,000 per day have been taken into hospital with Covid-19.

It comes as NHS England confirmed that a 19-year-old with no underlying health conditions had died in hospital after testing positive for Covid-19.

The jump is by far the biggest day-on-day rise in the number of deaths since the outbreak began.

Cabinet minister Michael Gove said the sharp rise in UK deaths from coronavirus was “deeply shocking” but he could not say exactly when the peak of the epidemic would come.

“There’s not a fixed date like Easter when you know that the peak will come, it depends on the actions of all of us,” he told reporters.

“We can delay that peak, we can flatten the curve through our own particular actions.”

He said despite signs that interventions were working, “now is absolutely not the time for people to imagine there can be any relaxation or slackening” of lockdown measures.

Turning to testing, Mr Gove said a “critical constraint” on the ability to rapidly increase testing capacity in the UK is the availability of chemical reagents.

He said Prime Minister Boris Johnson and Health Secretary Matt Hancock were working with companies worldwide to ensure the UK gets the material needed to increase tests “of all kind”.

The Government has faced serious criticism over testing, with fewer than 10,000 tests being carried out per day on average, despite claims this target had been hit.

On the issue of ventilators, Mr Gove said the UK was buying them from EU nations and had also placed orders at home.

“We have just over 8,000 ventilators deployed in NHS hospitals now,” he said.

“This number has increased since the epidemic began thanks to the hard work of NHS professionals, but we need more.

“That’s why we are buying more ventilators from abroad, including from EU nations.

“It’s also why we are developing new sources of supply at home.”

The first new ventilator devices will roll off the production line this weekend and be delivered to the NHS next week, Mr Gove said.

It comes as other figures revealed that the true death toll is higher than hospital statistics suggest.

Data from the Office for National Statistics (ONS) for England and Wales shows there were 24% more deaths relating to Covid-19 up to and including March 20, compared to hospital-only data for the same period.

The ONS looked at all deaths where Covid-19 was mentioned as a factor, including hospital deaths and those in the community and care homes.

A total of 210 deaths in England and Wales for the time period had Covid-19 mentioned on the death certificate, compared with 170 coronavirus-related deaths reported by NHS England and Public Health Wales.

Hospital figures are of people who have tested positive for Covid-19, whereas the ONS includes all deaths where Covid-19 is mentioned on the death certificate, even if only suspected.

However, the ONS data does provide a much wider picture of what may be happening in the community.

Earlier, Mr Johnson chaired a meeting of his Cabinet by videolink as he continues to self-isolate in Downing Street after testing positive for coronavirus.

The Prime Minister told the meeting: “The situation is going to get worse before it gets better – but it will get better.”

The UK total of coronavirus-related hospital deaths issued by the Department of Health differs to the total which can be calculated by adding together deaths announced by the NHS in Wales, Scotland and Northern Ireland because they compile them in different ways.