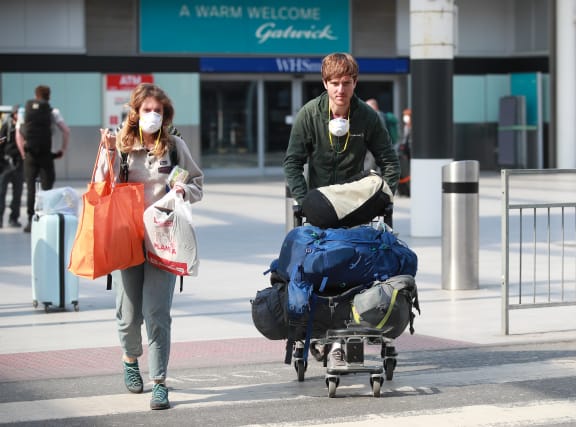 British citizens returning from Peru say they have been “left in the dark” by the Foreign Office on steps to take now they are home.

Two more British Airways (BA) flights carrying travellers from Lima touched down at Gatwick Airport on Tuesday morning, following those that landed at Heathrow on Monday.

It comes as Foreign Secretary Dominic Raab announced that £75 million would be set aside for charter flights to bring stranded Britons home from areas where commercial flights were no longer running.

“It feels weird, I burst into tears when I walked through – we’ve been trying to get home for so long,” said Alice Nuttall, 21, from Nantwich.

“We’re assuming, because we had to fill in our contact information on this form… that we’ll get contacted regarding [coronavirus].”

“We’ve been told we need to pay £250 for the repatriation flight by the Government.”

“They haven’t really advised us on anything else, we haven’t been screened or anything,” added her friend Ellie Durrant, 22.

Ms Nuttall’s father John Nuttall, 56, said that the women and their families would be taking “sensible” steps following guidance from Public Health England.

“They’ll self-isolate for 14 days and obviously follow the rest of the Government advice,” he said.

Relatives gathered at international arrivals in the terminal building, maintaining a two-metre distance, but many embraced their loved ones as they came through the gate.

Other travellers expressed disappointment at being forced to come home early and said that they had not been given any clear instructions or extra precautions after arriving back in the UK.

“It’s a bit strange to be home – I was expecting to be travelling for another two-and-a-half months,” said Anna-Lucia Strike, 18, from Chiswick in west London.

“We’ve been pretty left in the dark,” said Drew Jones, 27, from Essex.

“We’re going straight into isolation I think, don’t really have much to do at home or at work… totally mixed emotions.”

“After two weeks we were locked down in a hostel, it’s bitter sweet,” said his friend Ellis Clark, 26.

“I’m glad I’m out of that hostel but I’m quite bummed that I didn’t get to finish what I planned.”

Tuesday’s repatriation flights came as BA announced that it will temporarily suspend all flights from Gatwick.

On Monday, Luton-based carrier easyJet grounded its entire fleet of 334 aircraft as the aviation industry continues to struggle with the collapse in demand caused by the coronavirus pandemic.