Supermarkets use data to get food supplies to vulnerable customers 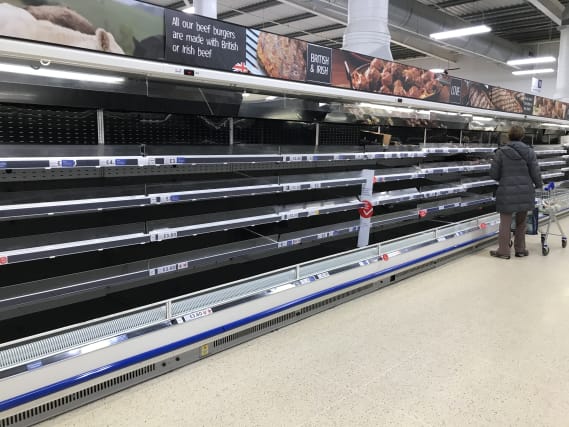 Supermarkets will use Government data to get supplies to customers who are most vulnerable to coronavirus, after almost two-thirds of older people said they were struggling to get enough food during the pandemic.

A survey by charity Independent Age said 64% of 489 adults over the age of 65 were unable to buy enough food, on the same day Asda announced it has a “dedicated team” working with the Government to get supplies to those most in need.

Sainsbury’s also said it will soon see the data on those considered vulnerable to Covid-19 and prioritise delivery slots for those most at risk.

The shopping problems are not limited to finding food, as the Opinium poll also found that 58% of older people reported struggling to purchase enough toilet paper, and nearly a third (31%) had difficulty getting medicine and healthcare supplies.

Around 29% of those who had encountered problems said getting hold of basic toiletries was an issue.

An Asda spokesman said the company was “working with Government and some of our fellow supermarkets to ensure those people who have been identified as highly vulnerable get what they need and are protected from Covid-19”.

Deborah Alsina, chief executive of Independent Age, said: “We’re very concerned to see that nearly two in three people are struggling to get their day-to-day essentials.

“It’s essential that people heed the advice that is being given by supermarkets and the Government, and think about others when they’re doing their grocery shopping – including respecting special shopping hours or delivery windows for older and vulnerable people.”

On Friday, one supermarket boss urged healthy people to go against Boris Johnson’s advice and visit shops in person to free up delivery slots for the elderly and vulnerable.

Managing director of Iceland, Richard Walker, told BBC Radio 4’s Today programme: “In a seminal address to the nation, the Prime Minister urged everyone to use food delivery services wherever possible; the reality is that current demand vastly exceeds supply.

“I’d actually urge the opposite of the PM, in that, if you are healthy, not in a vulnerable category and adhere to social-distancing guidelines, please do shop in store, but make sure you shop responsibly.”

He added: “That will enhance priority online for those who need it most.”

Shortages in supermarkets across the UK have prompted stores to impose restrictions.

On Friday, Tesco said that all online orders will be capped at a maximum of 80 items.

Previously, most online shoppers had fewer than 60 items in their basket, the store said, however a spike in orders with more than 100 items encouraged the company to implement the new rules.

Take gardening into your own hands with this gadget