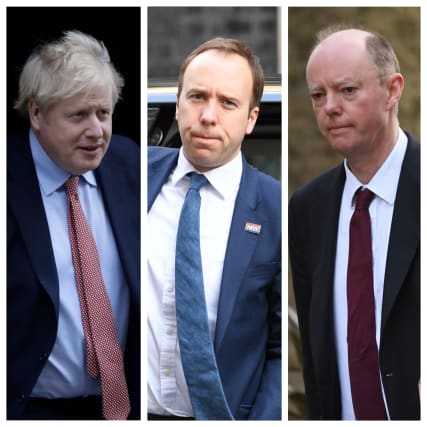 The UK has seen its biggest day-on-day rise in deaths since the Covid-19 outbreak began, as Boris Johnson and Matt Hancock said they have tested positive for the virus and frontline testing of NHS workers is set to begin.

A total of 759 people have now died in UK hospitals after being diagnosed with coronavirus, while 113,777 have tested positive and hundreds of thousands more people are thought to be infected.

The toll comes as Prime Minister Boris Johnson and Health Secretary Matt Hancock announced on social media within two hours of each other that they had tested positive for Covid-19 and were self-isolating with “mild symptoms”.

They were followed by England’s chief medical officer, Professor Chris Whitty, who tweeted that he had symptoms of coronavirus and was also self-isolating.

It means that the three men leading the fight against the outbreak are self-isolating though all continue to work.

Analysis by the PA news agency shows it took 13 days for the number of deaths in the UK to go from one to just above 100.

It took a further eight days to reach the latest total of 759.

The jump in coronavirus-related deaths in the UK from 578 to 759 is an increase of 181 – the biggest day-on-day rise and a 31% jump on the figures released on Thursday.

At the evening press briefing on Friday, Cabinet minister Michael Gove declined to be drawn on whether MPs had too slow when it came to social distancing, saying the fact both Mr Johnson and Mr Hancock had Covid-19 showed the “virus does not discriminate”, adding: “We are all at risk.”

He said the rate of infection across the UK was doubling every two to three days.

He also said that across England there are now 33,000 hospital beds available to treat coronavirus patients.

Currently, there are 6,200 confirmed Covid-19 patients being treated in English hospitals and he said that number is “only bound to rise in the coming days”.

Sir Simon said that as of Thursday, there were just under 3,000 empty and available hospital beds in London, and there would be additional beds next week at the new NHS Nightingale Hospital in east London.

Further NHS Nightingale hospitals are being built in Birmingham’s National Exhibition Centre and Manchester’s Central Convention Centre “with further such hospitals to follow”, he said.