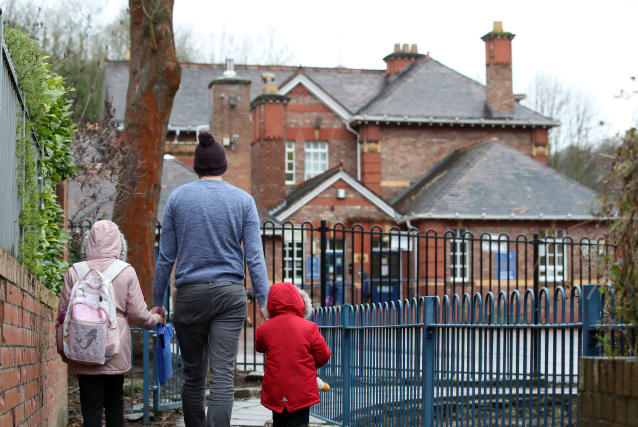 The number of pupils arriving at schools is “manageable”, school leaders have said, with indications that parents are following advice to only send youngsters in if they have no option.

There were fears that many more students than expected would arrive for class on Monday morning despite schools being officially closed.

It was announced last week that, while shutting their doors to the general population, schools would remain open for vulnerable youngsters and the children of key workers – including medics, police and food delivery workers.

Ahead of school gates opening, there were pleas for parents to keep their children at home where possible.

Geoff Barton, general secretary of the Association of School and College Leaders (ASCL), said the early signs were that mothers and fathers had heeded the call to only use the emergency provision offered by schools if they are “key workers who have no option available to keep their children at home”.

“Schools are reporting that the number of pupils arriving is manageable,” he said.

“We are grateful to parents for their understanding.

“We would like to pay tribute to schools for their amazing work in organising this provision so quickly. They have calmly gone about the business of identifying children who need places, arranging staffing cover, and providing learning resources for children who are at home. It has been an exemplary exercise in superb leadership.”

Mr Barton added: “Our biggest concern is the health and well-being of staff and pupils who are attending schools. Schools are actively managing this situation by ensuring social distancing, reinforcing messages about washing hands regularly, and ensuring that areas which are being used are regularly cleaned.”

The Department for Education has previously said that, if required, schools can ask for “simple evidence that the parent in question is a critical worker, such as their work ID badge or pay slip”.

Paul Whiteman, general secretary of the National Association of Head Teachers (NAHT), has urged employers not to take advantage of the lengthy list of key workers in order to keep their staff in work.

He said: “My appeal to companies and other employers: Please do not interpret the key workers lists liberally for your own ends.

“Do not put profit over people. School places are there for the most vulnerable and to keep truly crucial operations running.”

It was reported over the weekend that Pets At Home had drafted a letter to its workers indicating they may be able to request educational care.

The letter said: “We can confirm that our colleague/partner who has requested continued educational care falls within the list of critical categories and that their role is necessary for the continuation of essential services and that during this time they are unable to provide safe care for their child(ren) at home.”

A Pets At Home spokesman said: “The letter we shared with colleagues was simply intended to help them, and teachers at their children’s schools, understand what we believe to be the government guidelines.

“There is no question that NHS workers and others on the front line are the utmost priority and so we asked colleagues using this letter to also be respectful of the needs of others and the difficult decisions schools are having to take and to only apply for ‘key worker’ status if absolutely necessary.