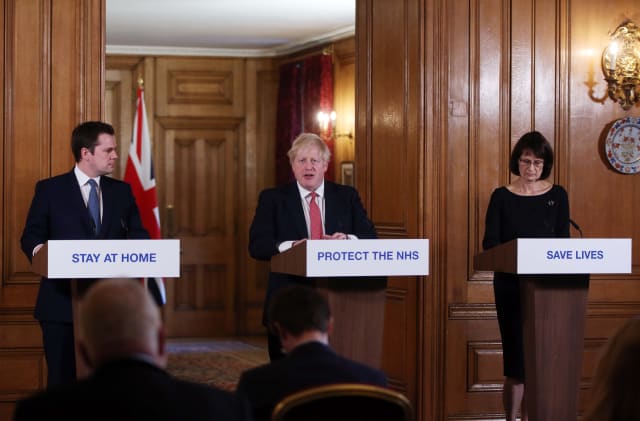 The Prime Minister issued what appeared to be a final warning for people to abide by coronavirus social distancing measures or face tougher restrictions in the coming days.

Boris Johnson hinted at stricter measures to limit social gatherings in open spaces, but stopped short of stating that the UK would be subject to a curfew.

Here are the key points from Sunday’s press conference:

Mr Johnson said the ability to go outdoors for exercise was extremely important for people’s wellbeing, but said it needed to be done “responsibly”.

“My message is you’ve got to do this in line with the advice, you’ve got to follow the social distancing rule – keep two metres apart,” he said.

He said if people fail to keep to the rules, “tougher measures” will have to be introduced, but refused to say what exactly they would be.

“I don’t think you need to use your imagination very much to see where we might have to go, and we will think about this very very actively in the next 24 hours,” he said.

“We need to think about the kind of measures we’ve seen elsewhere – other countries that have been forced to bring in restrictions on people’s movements altogether. Now as I say I don’t want to do that.”

Deputy chief medical officer Dr Jenny Harries said 1.5 million people who have been identified as clinically vulnerable will be advised in the coming days to take shielding measures.

Those measures include staying at home at all times and avoiding any face-to-face contact.

However she said the Government may have overestimated the number.

“For any of the public listening who might be in this group, because we want to be as inclusive as possible, we may slightly overestimate the number of individuals,” Dr Harries said.

In regard to social gatherings, Dr Harries said smaller groups of around 10 to 20 people presented a higher risk than large-scale gatherings.

She said: “It’s very difficult to be in a family group when you know each other very well and stay two metres apart – they’re probably riskier gatherings than the large ones.”

Communities Secretary Robert Jenrick said the Government was creating a network of local hubs to assist the clinically vulnerable who will be impacted by shielding measures.

Medicines will be delivered by pharmacists to those affected, while councils working with supermarkets will drop-off groceries on their doorsteps.

“Nobody needs to worry about getting the food and essential items that they will need,” he said.

Mr Jenrick said the care parcels will initially be free, with the Treasury footing the bill. But he added that the arrangement could change in the future.

He said: “If over time we’re able to refine it into a more sophisticated offer which is more tailored to individuals’ needs – and we’re working with supermarkets to see if that is possible in time – then it may be a different arrangement.”

Why Do Cotton Towels Get Stiff After Natural Drying?

Book a stay at this affordable, luxurious private island

Scientists Say They Found A Way To Extract Color From Black

This Martian Valley May Have Been Formed By Running Water