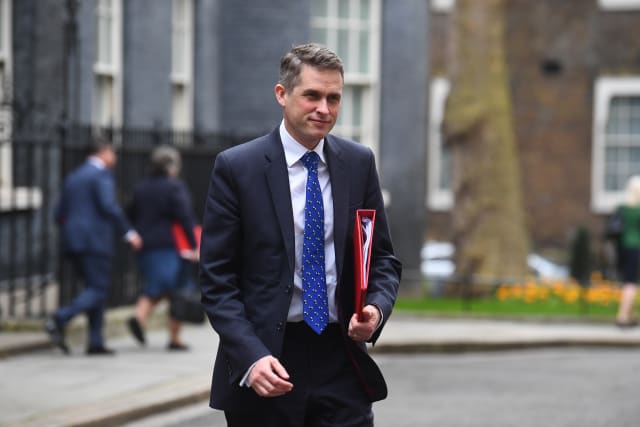 Emergency legislation to tackle the coronavirus outbreak is set to be published in Parliament as the Education Secretary moved to quell concerns over how school closures will affect students and parents.

Education Secretary Gavin Williamson said the Government will issue guidance on Friday on how pupils unable to sit their GCSEs and A-levels because of the school closures will be awarded their grades.

A list of the key workers whose children can still go to school will also be released later, he said.

On Wednesday, Prime Minister Boris Johnson announced school closures across the UK but promised the children of NHS and police workers and supermarket delivery drivers would still be able to attend, as would vulnerable children.

Speaking on BBC Radio 4’s Today programme on Thursday, Mr Williamson said there will be a “proper and fair system” of appeal for students who are unhappy with the results they are given as GCSEs and A-levels are cancelled.

He said: “We will be doing everything we can do to make sure they get their results in August as they will be hoping to, but we can’t predict as to how they are going to unfold.

“It is absolutely vital for me for those children who have put so much work into all their learning over these years working up to their GCSEs and A-levels to get their results, but also making sure that we have a proper and fair system if they dispute that, if they are not content with it, there is some mechanism for them to have redress.”

Universities UK chief executive Alistair Jarvis said: “If an appropriate way can be found to assess students, perhaps a combination of teacher assessments and assignment works that’s already done, then awards could be granted this summer.

“This would allow students to get their grades and the university admission process to go ahead this summer.”

It comes as Health Secretary Matt Hancock tables the Emergency Coronavirus Bill setting out measures aimed at slowing the spread and supporting the NHS and workers.

The legislation will be presented as the Army prepares to help out in the crisis and Londoners face the prospect of greater restrictions, with the capital suffering a faster spread of Covid-19.

So far, 104 people have died after testing positive for coronavirus in the UK and tens of thousands of people are thought to be infected.

Mr Williamson said the Government stands ready to take the “incredibly tough decisions” needed to slow the spread of the virus.

He said there are currently no plans to shut down bars and restaurants and order people off the streets, but ministers will be guided by the scientific evidence.

He also urged Chancellor Rishi Sunak to do “considerably more” to protect people’s jobs by the weekend.

Mr Brown told BBC Radio 4’s Today programme: “He says he’ll do more but the package should be out now to avoid redundancies being forced upon companies over the next day or two.

“I think a lot of company directors will be looking at the moment to how many staff they are going to shed in the next few days, next few weeks.

“And I think we need to step in now with building the confidence that we can keep people in work or keep people on short-term in work, and have an arrangement with people where they take some holidays but at the same time they are going to have income protection.

“If families don’t have income protection there’s lots of other consequences: people try to work if they are sick, people put themselves at risk.”

Meanwhile, English schools will shut their gates on Friday until further notice, as will nurseries, colleges and childminders.

GCSEs and A-levels in both England and Wales will be cancelled – although the Prime Minister said there are plans for students to receive qualifications.

In Scotland and Wales, all schools will close by Friday. A decision on whether exams will sit in Scotland has not yet been taken.

Schools in Northern Ireland will also shut and it is expected pupils will not sit summer exams.

Mr Johnson has said measures taken so far are helping slow the spread of the virus, but he has not ruled out tougher measures being enforced down the line.

The PM has also not ruled out stricter controls being imposed on London ahead of the rest of the country.

Transport for London has announced up to 40 Tube stations will be closed on Thursday and a reduced service will run on the rails from Friday.

London Mayor Sadiq Khan warned Londoners they should not be travelling unless they “really, really have to”, but he insisted the network must remain open to aid front-line health workers.

Elsewhere, the Archbishop of Canterbury Justin Welby has said he will lead a national broadcast as the Church of England responds to the challenge of becoming a “different sort of church”.