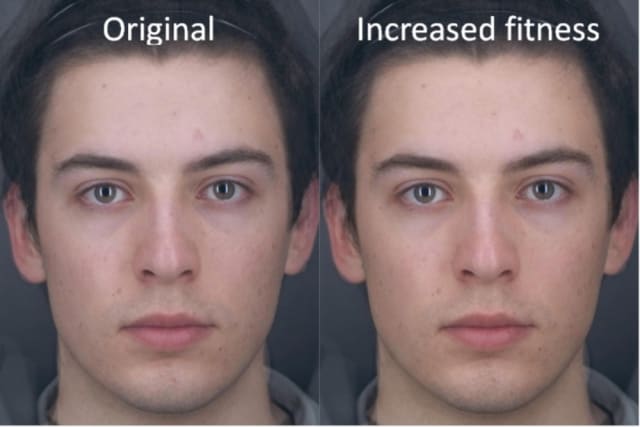 Leading a healthy lifestyle can help give people a “golden glow” by improving their skin colour, according to new research.

The study, led by the University of St Andrews, found a balanced and healthy lifestyle, including becoming fitter, avoiding stress and sleeping longer all gave skin a more healthy looking colour.

Previous studies have linked improvements in skin colour to a good diet but the latest study also examined the relationship between general health and skin tone.

Eating a healthy diet full of fruit and vegetables increases skin yellowness, making it look healthier and more attractive, with the change due to the accumulation of coloured plant pigments in the skin such as orange carotene from carrots and red lycopene from tomatoes.

These pigments, called carotenoids, play an important role as antioxidants, which can help protect against damage from oxidative toxins, caused by the stresses and strains of everyday life, that damage DNA and proteins.

Scientists said exercise boosts the body’s own antioxidant systems, which may spare the carotenoid pigments so they can accumulate in the skin, while losing excess body fat, reducing mental stress, and better quality, longer sleep may decrease the production of oxidative toxins.

Researchers found skin yellowness could be an indicator of a person’s health by demonstrating the body has enough antioxidant reserves and low levels of oxidative toxins.

Lead scientist for the study, Professor David Perrett, from the School of Psychology and Neuroscience at the University of St Andrews, said: “We worked with 134 students, measuring fitness from heart rate while walking and running on a treadmill.

“We assessed body fat levels with an impedance meter much like that available on many bathroom weighing scales.

“We measured skin colour with a device that records how a rainbow of colours is reflected from the skin.

“We found that both high fitness and low body fat were associated with a higher skin yellowness.

“This yellower skin of fit individuals was not due to a better diet or from a suntan from being outdoors more.”

The research team also assessed whether a change in health changed skin appearance and followed 59 students from sports clubs to measure the impact of their training on their skin.

They found those who became fitter or lost body fat showed an increase in skin yellowness.

Meanwhile, questionnaires showed increased psychological stress and a loss of sleep were associated with a reduction in skin yellowness.

The study is published in the journal Frontiers in Psychology.

Researchers also simulated the skin colour change in face images, keeping everything else such as expression constant, to examine how people perceived its impact on appearance.

Prof Perrett said: “For 21 observers we found the change in colour with increased fitness was visible and was judged as looking healthier on 90% of trials.

“This means that as people get healthier others should be able to notice the improvement in skin colour.

“We were surprised to find that the skin colour changes accompanying change in health occurred quite quickly and within eight weeks.

“This means that any effort to improve lifestyle will benefit appearance within a relatively short time.”

This glove can groom your pet instantly