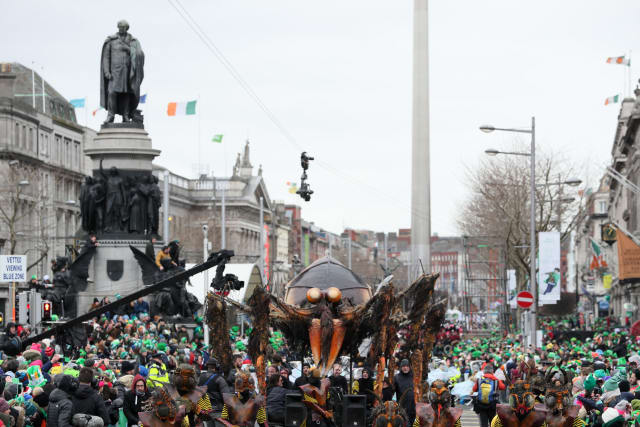 The new Cabinet sub-committee on Covid-19 has made a decision to cancel the St Patrick’s Day parade in Dublin.

Taoiseach Leo Varadkar is to brief the media this afternoon after he met with political party leaders.

On Monday morning, senior members of government and health experts discussed how to deal with the impact of the virus and as well as strengthening employment protection laws and supports for people who have to self-isolate.

It has also been confirmed that Mr Varadkar is to shorten his St Patrick’s visit to the US to attend further meetings about coronavirus.

He had been due to attend a UN event in New York, however a government spokesman said the Taoiseach will start his visit by attending engagements on Wednesday evening.

On Monday, Ireland’s health minister said the coronavirus outbreak in the country will become “very serious”, and there is a moderate to high risk it could follow in similar ways as experienced in other European nations.

Simon Harris said it will require a whole of government and whole of society approach to deal with the escalation in coronavirus cases.

He said the country’s health service will not be found wanting in its resources to tackle the outbreak.

Speaking to RTE Morning Ireland, Mr Harris urged the public not to panic.

“I think that’s a really important message, I know a lot of people are worried,” Mr Harris said.

“Over 80% of us who will get this virus will get a mild illness, but for some of us we will get very sick.

“There’s things all of us can do as individuals in terms of trying to slow the spread of this virus because the best possible chance we have in terms of dealing with this virus is to slow its spread.

“That helps our health service, it helps our frontline stuff and it helps us all as individuals.”

He added: “There’s a moderate to high risk of this, according to the European experts, taking hold in a very serious way in Ireland (and) that would require a prioritisation of services.

“It would require for a period of time us focusing on the virus above and beyond other procedures in hospitals.”

Mr Harris said the sub-committee will also make a decision on reducing the number of waiting days for social welfare payments and supports for people who have been told to self-isolate by health authorities.

“One of the things we’ve been looking at across government is can you reduce that waiting period so people can get support more quickly, and that’s something we’ll be considering today,” Mr Harris said.

He also said they are opening more ICU beds to “around 300” and will speak to the country’s private hospitals.

“It’s quite likely that if you got to a situation where this virus outbreaks in a serious way, that many elective procedures in private hospitals could yet be cancelled so they may have capacity,” Mr Harris said.

“We will not be found wanting when it comes to providing any resources that are required and the Minister for Finance (Pascal Donohoe) has been clear in this.”

Meanwhile, Sinn Fein leader Mary Lou McDonald was among those who called for the cancellation of said the St Patrick’s Day parade in Dublin.

Speaking to RTE radio, she said it would be “the responsible and necessary thing to do”.

This Leather Shoe Is Only 5,500 Years Old

Why Is Iceberg Lettuce Called So?

How to stay eco-friendly in self-isolation