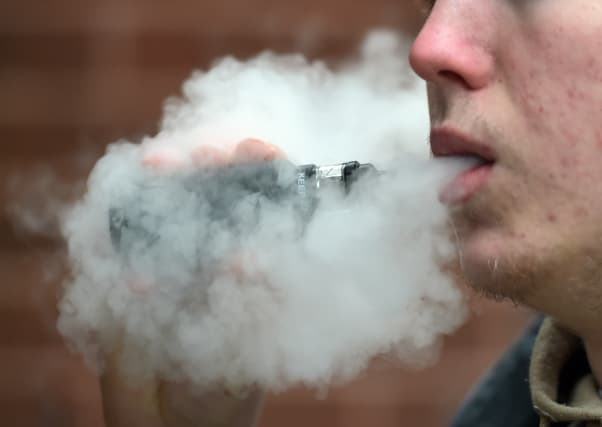 Enforcing the age restriction on e-cigarettes needs to be improved, public health chiefs have said.

A new report, commissioned by Public Health England (PHE) and published on Wednesday, said that survey data suggested nearly two-thirds of 11- to 17-year-olds who currently vaped more than once a month had bought products themselves.

This compared to a third who said they had been given them by someone they know.

Respondents said they had bought vaping products from a shop, over the internet and from street markets.

PHE said that proof of age for the sale of vaping product needed to be better enforced to protect young people.

It is illegal to sell vaping products to anyone under the age of 18.

Professor Ann McNeill, professor of tobacco addiction at King’s College London and lead author of the report, said: “In our review we present evidence that suggests in England, vaping has not undermined declines in adult smoking, and for youth, vaping is mainly concentrated in those who were already dabbling in cigarette smoking.

“However, we need to remain vigilant and ensure that vaping products, alongside regular cigarettes, are not easily accessible to young people.”

The report warned that the data should be treated with caution because the number of respondents was very low.

The new report also warned that “false fears” were preventing smokers from using e-cigarettes to quit.

PHE said that more than half of smokers believed that nicotine vaping products were equally or more harmful than smoking, despite the US vaping deaths being caused by substances that are banned in the UK.

It added that its advice remained that smokers should switch to e-cigarettes to help them quit smoking, but non-smokers should not take up vaping.

Professor John Newton, director of health improvement at Public Health England, said: “It is concerning to see how much the US lung disease outbreak has affected smokers’ views on e-cigarettes here in the UK.

“Safety fears may well be deterring many smokers from switching, leaving them on a path to years of ill health and an early death due to their smoking.

“The US authorities have now confirmed that vitamin E acetate, a thickening agent added to cannabis vaping liquid, was a primary cause of the US outbreak. This substance is banned in UK-regulated nicotine vaping products.

“E-cigarettes are far less harmful than smoking, which causes 220 premature deaths a day in England.

“Our advice remains that for anyone who smokes tobacco, the most important thing is to stop smoking altogether and e-cigarettes can be an effective way to help smokers do that.”

The authors said they feared that smokers are being deterred by safety fears from using e-cigarettes to quit, which will ultimately cost lives.

The report also warns that a ban on flavoured liquids could also deter some smokers from switching to e-cigarettes completely.

Chief medical officer for England Professor Chris Whitty said: “The best thing a smoker can do for their health is stop smoking completely.

“Electronic cigarettes can help some people quit smoking and are a safer alternative.

“This report is a further welcome contribution to building the evidence around an important area of public policy and highlights the challenge of maximising the opportunities e-cigarettes present while managing the risks associated with nicotine.”

PHE has commissioned a full review of the evidence on the safety of e-cigarettes which is due to be published in 2022.

How to Survive Working from Home with Your Partner