Coronavirus could put more than 200,000 Scots in hospital, says Sturgeon 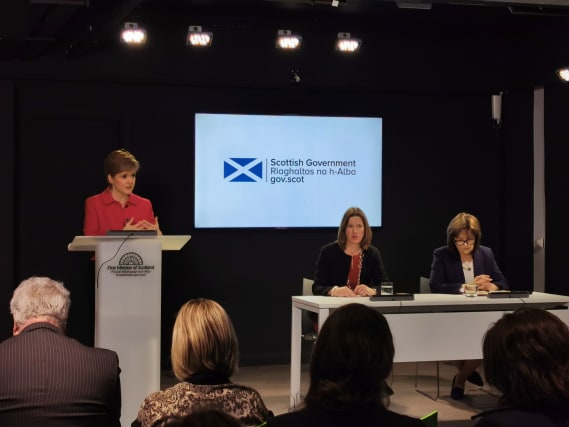 More than 200,000 Scots could end up in hospital due to coronavirus in a “worst-case outcome”, Nicola Sturgeon has said.

The First Minister has warned the Scottish Government is expecting a “significant outbreak of coronavirus”, with estimates of between 50% and 80% of the population becoming infected.

Speaking after the first case of the Covid-19 virus was confirmed in Scotland, Ms Sturgeon said ministers were working to slow the spread of the virus to give the NHS the best possible chance of coping.

As many as four in five people in Scotland are expected to become infected by coronavirus as some point, according to chief medical officer Dr Catherine Calderwood, who forecast 4% will need hospital treatment.

Approximately 80% of those infected “will have a mild illness, the equivalent of a cough or mild flu so will fully recover and be able to return to work and normal activities within a week or 10 days”, Dr Calderwood said.

She added the “peak” of the outbreak – when most people will catch the virus – is not expected for another two to three months if the spread of coronavirus “becomes sustained”.

“We would have a large number of people (catching coronavirus) in a short time frame but with the wider population affected by up to 80% – but this is over months and months,” Dr Calderwood said.

“We’re expecting perhaps 50% or as much as 80% of the population during that epidemic.”

The forecasts are based on modelling from the outbreak in China, with Ms Sturgeon seeking to reassure the pubic there are “well-established procedures and protocols in place”.

Urging people to follow advice about hand-washing and infection control, Ms Sturgeon said: “At this stage in particular of dealing with an outbreak like this, the public has a big part to play, and a very important part to play, in helping us to contain – for as long as possible – the spread of this virus.”

Ms Sturgeon explained Scotland’s response to the global epidemic is in the “contain phase” and will be escalated to the “delay phase” – which could lead to large events being cancelled and revised advice issued – based on the advice of scientific experts from across the UK.

“In terms of the delay phase, part of the purpose of that is to try to ensure those kind of numbers are not all hitting all at once, that the spread of the infection is being slowed down,” she said.

“It’s really important in situations like this to be frank and factual in the information we give but we are dealing with reasonable worst-case predictions.

“We are not sitting here right now saying all of this will come to pass but I think the public would want to know we are preparing on the basis of what we think is the reasonable worst-case outcome.”

The First Minister’s statement, alongside Dr Calderwood and Health Secretary Jeane Freeman, followed the diagnosis of the virus in a patient who had returned from northern Italy.

Expanding on the person’s condition, Ms Sturgeon said: “The patient is not seriously ill at this stage, they are in hospital as a precautionary measure.”

The Tayside resident is currently receiving treatment in isolation, although the majority of future cases are likely to involve self-isolation rather than people being taken to hospital “unless there is a clinical need”, Ms Sturgeon said.

The latest figures in Scotland reveal 815 people have been tested for the infection, with one confirmed case.

Here's How Soil Gets Its Peculiar Smell