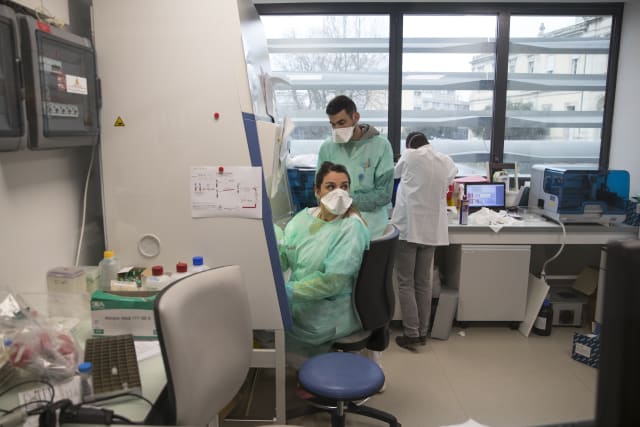 The first case of Covid-19 has been diagnosed in Northern Ireland while two more people have tested positive across the rest of the UK on Thursday.

Northern Ireland’s Public Health Agency announced the case at a briefing in Belfast and said it was “working rapidly” to identify anyone the patient came into contact with to prevent a further spread.

The Northern Ireland patient had recently returned from northern Italy and had previously been in Dublin.

Another of the new cases, a parent at a Buxton primary school in Derbyshire, contracted the virus in Tenerife, where 168 Britons are being kept in a hotel on the south west of the island.

The third patient also contracted the virus in Italy, which has become the worst affected country in Europe with more than 400 cases and 14 deaths.

The new cases bring the total number of people diagnosed with Covid-19 in the UK to 16.

Dr McBride said: “We have been planning for the first positive case in Northern Ireland and have made clear that it was a question of when not if.

“Members of the public who have visited affected regions and have symptoms are advised to self-isolate at home and contact their GP in the first instance.

“Advice will then be given on next steps, including testing if required.”

He added: “We have now seen our first case in Northern Ireland of someone returning from Northern Italy and that is not unexpected.

“We have well-trialled and tested methods for identifying people who have been in contact… following up giving them advice and taking appropriate steps to protect the public.”

He added the case was not linked to a school trip to Italy.

One of the patients in England has been taken to the specialist infectious diseases centre at the Royal Liverpool Hospital and the other to the Royal Free Hospital in London.

The NI Public Health Agency would not confirm where their patient was being held.

It comes as England’s chief medical officer, Professor Chris Whitty, warned that onward transmission between people in the UK was “just a matter of time in my view”.

Speaking at a Nuffield Trust summit, he said: “If this becomes a global epidemic then the UK will get it, and if it does not become a global epidemic, the UK is perfectly capable of containing and getting rid of individual cases leading to onward transmission.”

But he said onward transmission was likely, adding: “If it is something which is containable, the UK can contain it.

“If it is not containable, it will be non-containable everywhere and then it is coming our way.”

He said there could be a potential “social cost” if the virus intensifies, which could include reducing mass gatherings and closing schools.

“The implications of that are non-trivial, so we need to think that through carefully.

“This is something we face as really quite a serious problem for society potentially if this goes out of control.”

In Derbyshire, Burbage Primary School in Buxton remains closed after a parent there was diagnosed with the illness.

Dr Fu-Meng Khaw, centre director for Public Health England (PHE) East Midlands, said PHE was contacting people who had close contact with the patient, and confirmed they were infected whilst in Tenerife.

Meanwhile, 168 Britons remain confined to the H10 Costa Adeje Palace in Tenerife after at least four guests were diagnosed with coronavirus.

Sources told the PA news agency that around 50 of the Britons will be allowed to leave if they wish.

The Minister of Health in Tenerife said around 130 of guests from 11 different countries will be able to leave the hotel if they arrived on Monday, after infected guests had already left.

But it is unclear whether anyone from the UK will be allowed to leave.

So far in the UK, 7,690 people have been tested for the virus and of the 16 to have tested positive, eight have so far been discharged from hospital.

World Health Organisation (WHO) director-general, Dr Tedros Ghebreyesus, told a press conference in Geneva on Thursday that coronavirus has the potential to become a global pandemic but this stage had not been reached.