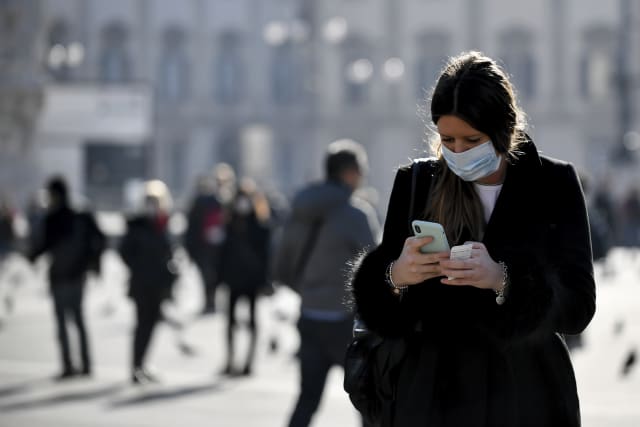 Travellers returning to the UK from northern Italy should self-isolate as part of measures to stop the spread of coronavirus, ministers have said.

Health Secretary Matt Hancock said official advice, updated at 8am on Tuesday, has been changed to say that those who have been to northern Italy – north of Pisa – should self-isolate if they have flu-like symptoms.

Speaking on BBC Breakfast, he added: “If people have been to the affected areas that the Italian government have quarantined then they should self-isolate whether or not they have symptoms.”

In Italy, where 229 people have tested positive for the virus and seven have died, police have manned checkpoints around a dozen quarantined northern towns.

Schools were closed, theatre performances cancelled, and Venice Carnival celebrations were called off.

Mr Hancock said the Government was not aware of any Britons who were in the quarantined areas of northern Italy, but he urged anyone there to make contact with the embassy in Rome.

The minister added that there were no changes to travel advice about going to Italy but those returning and showing symptoms should self-isolate.

He added: “In terms of going to Italy as a whole we haven’t changed that travel advice.

“But we are clear that, if you come back from northern Italy and you have symptoms, then you should self-isolate.”

The new travel advice comes as World Health Organisation (WHO) director-general Tedros Ghebreyesus warned that, while the spread of the virus around the world is not yet at pandemic stage, it has the potential to become one.

But Mr Hancock said the UK has done a “huge amount” of work preparing in case coronavirus became a pandemic, including setting up testing facilities outside A&Es and preparing home testing kits.

He added: “Since the outbreak became public at the start of this year, we have been doing a huge amount of work to prepare in case this becomes a pandemic.

“Once it gets to that point there isn’t a way to stop it coming into the UK in a big way.

“it is not yet clear that it will become a pandemic – the number of cases in China has been slowing over the last couple of weeks and we are relatively confident that information is correct.

“Now there are more cases outside China, but at the moment if those countries get their response right and get the numbers coming down as China has then there still is the possibility this is a relatively small outbreak in the UK.

“We still expect more cases but a the moment there are 13 cases in the UK.”

In the UK, 13 people have been diagnosed with Covid-19 caused by the virus, including four over the weekend who had been on the Diamond Princess cruise ship that was held in quarantine in Japan.

The four Britons from the cruise ship are being treated at specialist centres and were among a group of 30 Britons and two Irish citizens who arrived at a quarantine block at Arrowe Park Hospital in Merseyside on Saturday.

China reported 508 new cases and another 71 deaths on Tuesday, 68 of them in the central city of Wuhan, where the epidemic was first detected in December.

The updates bring mainland China’s totals to 77,658 cases and 2,663 deaths, while South Korea now has the second highest number of cases in the world with 893 and eight deaths.

Jeremy Clarkson hits out at misquoted Daily Mail article: 'This is NOT what I said'

Quarantined Couples Are Filing For Divorce