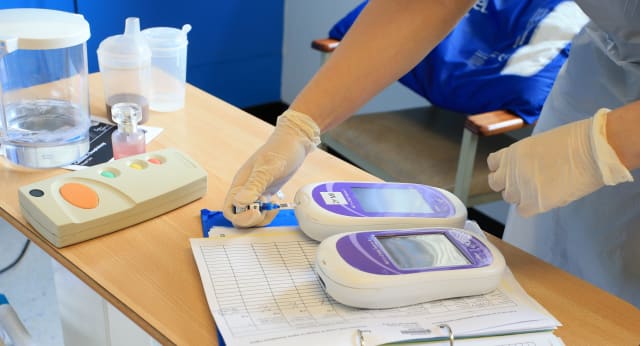 People with type 2 diabetes are 50% more likely to die early than those without the condition, a charity has warned.

Some 3.9 million people over the age of 16 in the UK have a diabetes diagnosis, 90% of whom have type 2, Diabetes UK said.

By 2025, the overall number of people with diabetes is expected to surpass five million, Diabetes UK added.

Heart disease is a common complication of diabetes, that can lead to early death.

People with type 2 diabetes are up to two-and-a-half times more likely to experience heart failure, and twice as likely to have a heart attack, compared with those without the condition, according to data from the National Diabetes Audit.

Being overweight is the greatest risk factor for developing type 2 diabetes, while age, family history and ethnicity can also play a part.

Obesity in England has almost doubled in the last 20 years from 6.9 to 13 million, but Diabetes UK said government action to tackle this “appears to have stalled”.

The charity is calling on the Government to honour its manifesto commitment to tackle childhood obesity, and for the Government and NHS England to continue their efforts to produce better care to prevent complications.

“More than half of all cases of type 2 diabetes − and the accompanying risk of developing devastating complications − could be prevented or delayed by supporting people to make healthier choices.

“This includes mandating industry to make food and drinks healthier and addressing the marketing and promotion of unhealthy foods.”

NHS national clinical director for obesity and diabetes, Professor Jonathan Valabhji, said: “While diabetes is a dangerous public health threat that can shorten people’s lives, as well as costing the NHS billions every year, thanks to better NHS treatment, the outlook for people with both type 1 and type 2 diabetes has improved considerably over the last 20 years.

“As part of the NHS Long Term Plan we are also now delivering the world’s largest type 2 diabetes prevention programme in order to prevent people from developing type 2 diabetes in the first place.”

A Department of Health and Social Care spokeswoman said: “Obesity can have serious consequences for anyone’s health.

“Our goal is to halve childhood obesity rates by 2030 and prioritise prevention so it is easier for families to make healthier choices to live longer and healthier lives.

“Already our robust action has decreased the sugar content in soft drinks by almost a third and we’ve invested millions promoting physical activity in schools.

“We are working with councils to tackle child obesity locally through ground-breaking new programmes.”

Cat hilariously sneaks up on owner in suspense-filled video

How Experts Say a Three-Day Weekend Affects Your Body