A dad was forced to deliver his own baby at home using just ONE HAND after his wife went into labour and gave birth - while his broken hand was in a cast.

Jade Brown, 24, went into labour in the middle of the night and it happened so quickly she had to give birth at home on the sofa.

Rhys' left arm was in a huge plaster cast because he had just broken his thumb in three places, leaving him unable to use it at all.

But that didn't stop Rhys, 28, and he safely caught baby Ariana in one had - while also juggling towels and a phone. 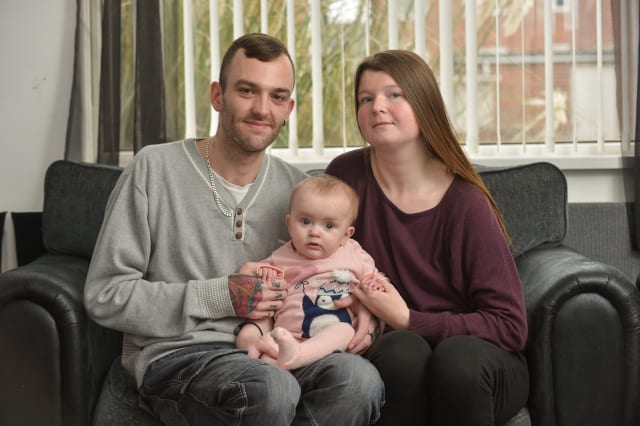 Paramedics arrived minutes later and Rhys quipped "I've done your job for you" before they cut the cord and took mum and baby to hospital.

The family are now safely back home in Sunderland, Tyne and Wear - and Rhys joked changing nappies with one hand was just as hard as delivering babies one-armed.

He said: "I had the cast on one hand and a phone in the other - trying to deliver a baby!

"I was running around trying to find towels while the woman on the line was trying to give me instructions.

"I bent down and stuck my hand out and the baby just came out. The ambulance arrived two minutes later and they cut the umbilical cord. I said: 'It's alright - I've done your job for you!'.

"It's funny - Jade was adamant in the run up that she didn't want me near the business area during the birth.

"I should have brought my baseball glove - then it would have been fine! But it was quite scary."

Jade said: "I was so glad that Rhys got to be so involved with the birth of our baby girl and I am so proud of him for delivering her - especially with a cast on his arm.

"He was amazing during and after the birth and he's an amazing dad to Ariana."

Rhys broke his thumb when he fell backwards playing five-a-side football for the first time in six years.

His arm was put into a bright blue plaster cast from his knuckles to the middle of his forearm for eight weeks.

A week later girlfriend Jade's waters broke when she bent down to pick up a sock, and they went to hospital, but she wasn't dilated enough and they were sent home, on June 19.

Rhys added: "We were told to come back at the next afternoon if nothing happened and they would start her off, so we went home.

"Jade tried to get some sleep, but by 2am the pain was overwhelming."

Jade said: "I was trying to just breathe through them but they were getting more intense so I went downstairs and sat with Rhys.

"I was squeezing his hand every time I got a contraction but as time went on I couldn't cope with the pain and told Rhys we needed to go to the hospital."

They called for a taxi, but when things got more serious Rhys dialled 999 and was connected to an operator who told him the ambulance was on the way.

But the situation escalated and he had to get involved.

"After a few pushes, our baby girl Ariana was born on the settee," said Jade.

"I remember lying with her on my chest and I couldn't believe how quick it all happened."

Ariana's official time of birth was 4:23am.

Rhys said: "Jade had no pain relief apart from a couple of paracetamol and some gas and air in the ambulance.

"I had wanted to do the honour of cutting the umbilical cord but the paramedics said I shouldn't, because of the situation.

"Apparently we were quite lucky. Lots of stuff could have gone wrong. Ariana is a miracle, really. She was conceived two months after Jade had a miscarriage."

This Is The Most Popular Woman In The World On Tinder

What Would Happen If Earth Stopped Spinning?

Make Your Dreams Come True by Working From Home in 2020