Woman's pregnancy symptoms and 'bump' turned out to be cancerous cyst

When Katie Holmes' periods suddenly stopped and she started to be sick in the morning, she thought she might be pregnant.

Particularly when her stomach grew into a bump and people started offering her seats on public transport or asking about her due date.

But despite countless pregnancy tests and visits to the doctors, everything was negative.

The 22-year-old from Waltham Cross, Hertfordshire was prescribed antibiotics for urine infections, but that did nothing to help. 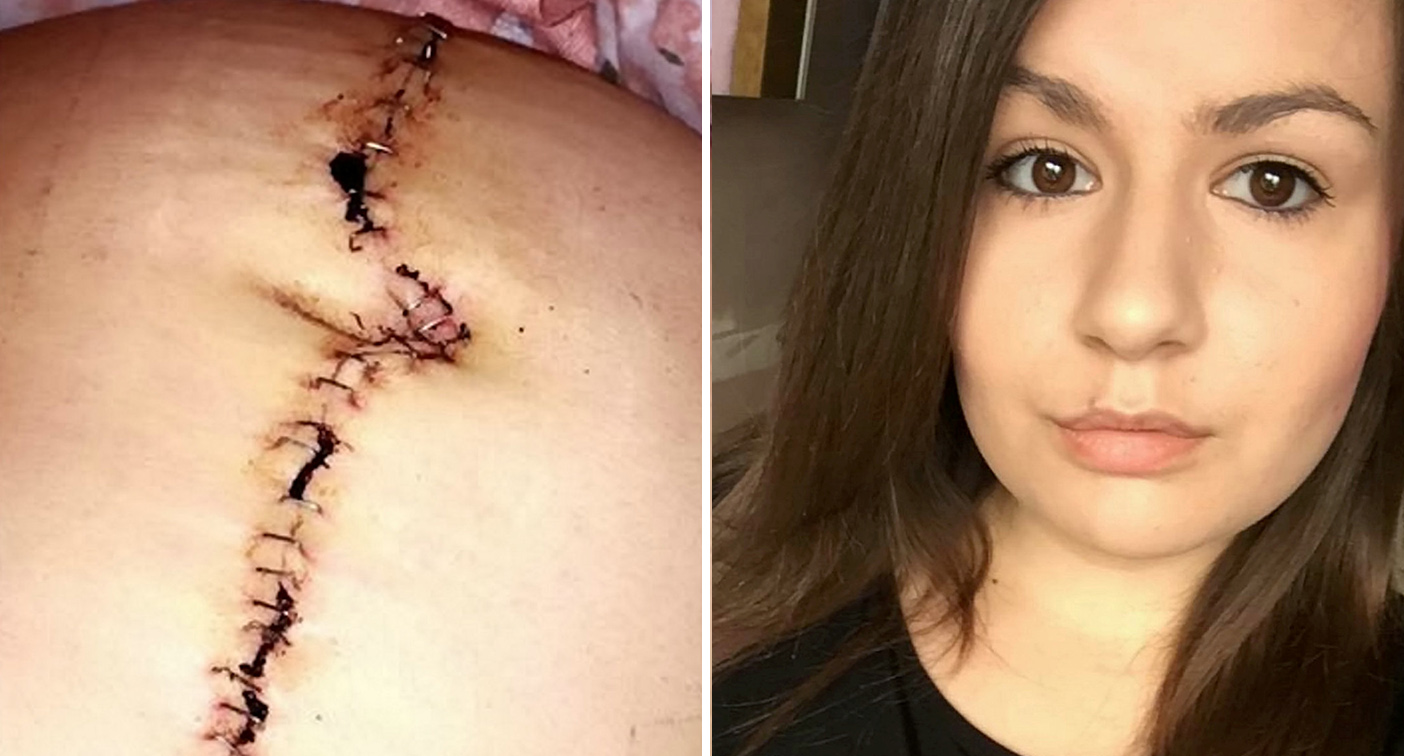 By then her tummy had grown into a big bump that was hard to touch, her hair had started to fall out and she could barely eat.

"For months, I had no idea what was wrong with me," she says. "It was so frustrating not having an answer and really quite scary.

"I was in lots of pain, I couldn't pee properly and my periods had stopped.

"I'd get full after eating half a meal and my stomach was growing in size even though I wasn't gaining weight anywhere else.

"It got to the point where people were asking me my due date and offering me seats on public transport - it was mortifying."

Her doctor thought she could have gastroenteritis and she was sent home with tablets but when they made no difference, she kept returning to the doctors every week for two months.

The turning point came in December 2016 when her stomach suddenly 'dropped' one evening at home.

She was lying in bed when she suddenly felt an excruciating pain in her stomach.

"It was the worst pain I'd ever felt," she explains.

"I looked down at my stomach as I lay in bed and felt it looked different somehow, so I dragged myself out of bed and to the mirror.

"My stomach had been solid and round for months, but looking at it that night, it was like the whole bump had dropped to a resemble a soft fat tummy hanging down.

"It was really bizarre - I'd gone from looking pregnant to looking really overweight in an evening, and it was just so confusing."

The experience prompted Holmes to head online to search her symptoms.

"Googling lead me to a blog about having a girl who had ovarian cyst, and when I suggested that to the doctor, they finally scanned me and found I was right."

She took her findings to her GP and was finally sent for an ultrasound which revealed Katie was carrying a massive ovarian cyst.

"My cyst was so big that it was covering my ovaries on the ultrasound scan, which was really scary," she explains.

In fact the cyst was so big it had actually pushed some of her vital organs up into her ribs.

"It was a relief to finally have an answer for my pain but also terrifying because there was a chance that I could have cancer," she says.

"The doctors warned me that if my ovaries were twisted from the cyst, then they'd have to remove them so I was facing the possibility of not being able to have children as well."

Katie was booked in for a laparotomy in January 2017 where doctors removed the 14lb ovarian cyst as well as one of her ovaries.

But having her ovary removed left Holmes worried she would struggle to have children in the future.

Incredibly, however, in July 2017 she found out she was pregnant, and went on to give birth to baby Ava in April 2018.

"The day after my surgery I was devastated to hear that they'd had to remove an ovary - I thought I might never have children.

"I hadn't been convinced I'd ever want kids before I went through all this, but there was something horrible about having that choice removed from me.

"I was focusing on getting my life back on track afterwards when I actually found out I was pregnant just six months after the surgery - for real this time!

"I was over the moon.

"I've never been happier, she's just amazing and I'm so glad my cancerous cyst didn't stop me from becoming a mum after all."