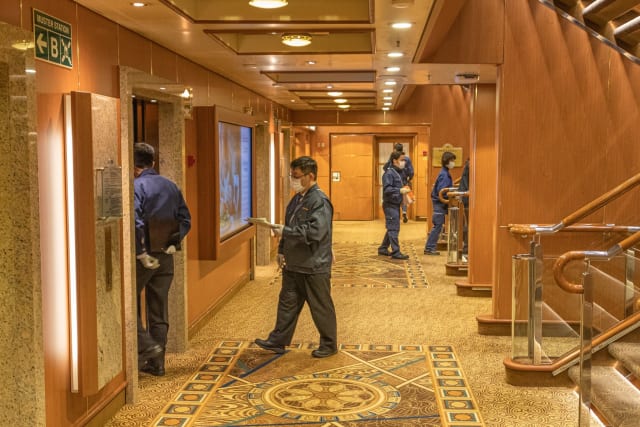 A Briton quarantined onboard a cruise ship in Japan amid coronavirus fears, said the ship resembles a “ghost town”, with most of the 3,000-strong passengers choosing to remain holed up in their staterooms.

The Diamond Princess has been left in limbo in Yokohama Bay, awaiting tests results for those board before anyone can be allowed to leave.

Japan ordered the ship, owned and operated by Princess Cruises, into quarantine after an 80-year-old passenger who left the ship in Hong Kong on January 25 tested positive for coronavirus.

David Abel, who is on board with his wife Sally, was due to fly home to the UK on Monday but had to cancel their flight after they were not allowed to leave.

The couple, from Woodford Halse in Oxfordshire, now have an open return, as they do not know when the quarantine will be lifted.

Officials boarded the ship on Monday night and told passengers they would be running medical checks on everyone.

This took from midnight until 7pm local time to complete.

Mr Abel told the PA news agency: “We didn’t get much sleep last night, as we were waiting for that knock on the door to be checked.”

“The ship is like a ghost town, it’s really weird,” he said.

“I went for a walk around a part of the ship that is normally really busy – the musicians were still out playing, but where there normally would have been crowds of people, I saw maybe 20.

“Even the shopping areas where it would be packed are empty.”

They have now decided to self-quarantine in their room, like many of the other passengers.

“We haven’t been told this, but my gut instinct is we will be quarantined on the ship – although they could take us to a medical facility. We just don’t know.

“We are trying not to be worried… these things happen.

“It’s a bit frustrating because we just want to get on with our lives – and we are worried about our two Yorkshire Terrier dogs left at home.”

They arrived on the ship 15 days ago and said they visited five more ports after the man carrying the coronavirus disembarked – after his illness came to light they had to undergo more health checks to visit their final port.

It could be up to eight hours until they are told what will happen next.