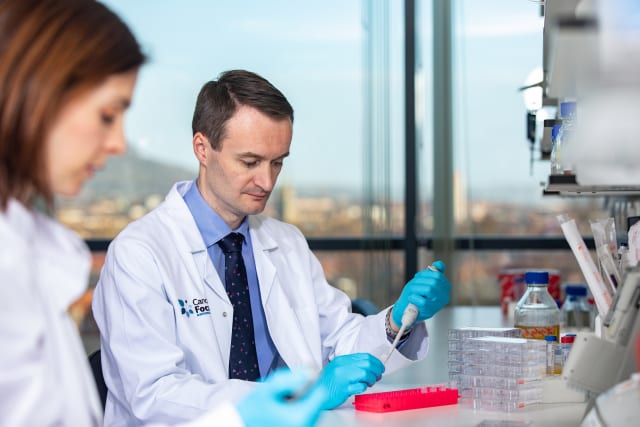 A pancreatic cancer survivor who lived to see his children grow up thanks to “incredible” drugs has hailed pioneering new UK research into two of the most deadly varieties.

Regular gym-goer Ivan McMinn, 57, is fit and healthy eight years and two months after diagnosis with a condition which rapidly kills around three-quarters of patients due to lack of early symptoms.

“I realise every day just how fortunate I am.

Mr McMinn, a former senior bank official living in Belfast, was super-fit and training for a marathon when diagnosed with pancreatic cancer after presenting to doctors with jaundice.

He was fortunate that the tumour had blocked a duct and given an early warning denied to many.

He received a major surgery known as the Whipple procedure followed by eight months of chemotherapy.

Four years later he was told the disease had returned and was inoperable, with only a 10% chance of more chemotherapy working.

He said: “Eight months later after chemotherapy I was told that the tumours were not visible and I am still here today.

“At various parts of that journey there were some reasonably hard conversations about whether survival was possible or not.

“With the help of incredible medics, strong faith, some incredible drugs, family support, I came through.”

The increased sophistication of treatment due to research was seen in the difference between when he was first diagnosed and the cancer returning, he said.

“I am a consequence of that, being here.

“I am an absolute convert, in that we need ongoing research to further improve the survival chances of those who are unfortunate enough to be diagnosed with pancreatic cancer.

“There are some incredible programmes under way and I am delighted that Dr Richard Turkington has decided to take on research into pancreatic cancer and oesophageal cancer.”

Oncologist Dr Turkington said relatively small amounts of the UK cancer research budget were spent investigating the diseases he is taking on.

“Unfortunately these are two cancers that are particularly difficult to treat and unfortunately we have not seen improvements for patients over the last 40 years.”

He added: “Immunotheraphy harnesses the power of the body’s immune system to attack the cancer cells.”

Cancer cells are able to hide from the body’s natural defences and grow.

The researcher said immunotherapy “unmasked” unhealthy cells so they could be attacked and destroyed by the immune system.

Mr McMinn added: “I am the lucky one, if you are on the other sides of those statistics, there are a lot of folks who have had young kids who have not had that chance.

“The work that Richard is doing won’t help them unfortunately but it will help the survival chances of pancreatic cancer patients in the future.

“The funds that are being made available by Cancer Focus NI are going to play a significant part in the lives of many Northern Ireland people.

“The thing is, those Northern Ireland people don’t know that yet.

“It is only in years to come that they will see the benefit of that.”