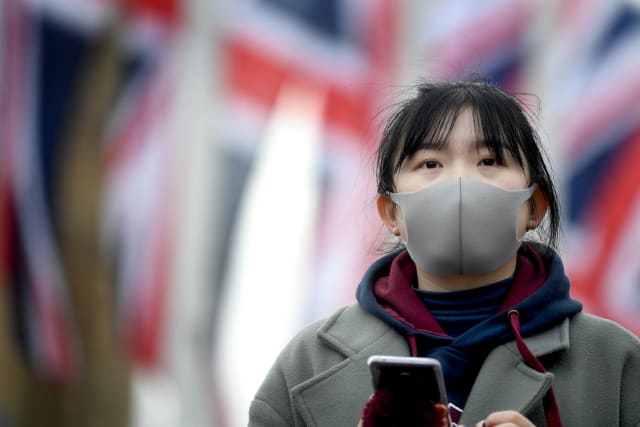 The first cases of the coronavirus have been diagnosed in the UK, with two people from the same family being treated at a specialist centre.

The announcement was made as more than 80 Britons on an evacuation flight from the Chinese city at the centre of the outbreak were due to land in the UK.

It is understood that they travelled to the UK from China in recent days and are undergoing treatment at the Newcastle Royal Victoria Infirmary.

An outbreak investigation team has been formed to trace anyone who has been in contact with the pair to prevent onward transmission.

Professor Sharon Peacock from Public Health England said anyone who has been in contact with the two patients in England should self-isolate for 14 days, and if they develop any symptoms they are advised to call 111 or their GP.

She said while staff are currently working to trace people who have been in contact with the pair, they do not currently have “any idea” of how high that number might be.

In a statement, chief medical officer, Professor Chris Whitty, said: “The patients are receiving specialist NHS care, and we are using tried and tested infection control procedures to prevent further spread of the virus.

“The NHS is extremely well prepared and used to managing infections, and we are already working rapidly to identify any contacts the patients had, to prevent further spread.

“We have been preparing for UK cases of novel coronavirus and we have robust infection control measures in place to respond immediately.

“We are continuing to work closely with the World Health Organisation and the international community as the outbreak in China develops to ensure we are ready for all eventualities.”

Anyone who comes to the UK from anywhere in China and shows any symptoms associated with the coronavirus should “self-isolate” for 14 days, Prof Whitty added.

It comes as ministers said the Government will send another plane to coronavirus-hit Wuhan to rescue British citizens if needed.

The PA news agency understands that the Foreign Office (FCO) is working with EU countries to add British passengers to any rescue flights they may charter back from Wuhan.

After several delays, the evacuation flight left Wuhan at 9.45am local time on Friday, carrying 83 Britons and 27 non-UK nationals, mostly from EU countries.

The flight is expected to arrive at the Brize Norton RAF base in Oxfordshire at around 1pm, the FCO said.

Cabinet Office Minister Michael Gove told Sky News on Friday that another plane will be sent if necessary.

He added: “The flight which is in the air at the moment is not the end of our efforts.

“It is only one part that we are doing in order to keep people safe.”

The evacuation flight came after the UK’s four chief medical officers raised the risk level of the illness from low to moderate and the World Health Organisation (WHO) declared an international public health emergency.

Chinese health officials said on Friday morning that the death toll in the country from the virus had risen to 213, with the number of known cases rising from 7,711 to 9,962.

The number of coronavirus cases worldwide has now surpassed that of the Sars epidemic, although death rates are currently lower, suggesting it is less deadly.

Many other countries, including Australia, South Korea, Singapore and New Zealand have said they plan to quarantine evacuees for two weeks to avoid spread of the virus.

The British passengers on the UK evacuation flight – who have mainly been in Wuhan and the surrounding Hubei province – had to sign a contract agreeing to isolation before they could board the flight.

Deputy chief medical officer Dr Jenny Harries said: “Everybody who has got on the plane is a well passenger.

“If any of those passengers do show symptoms there are set procedures to isolate them during any process and remove them in any part of the journey.”

She said all passengers had undergone screening before boarding the plane and were subject to ongoing questioning and continuous risk assessment during the journey.

On arrival, the passengers will be taken by bus to Arrowe Park Hospital in Wirral for a quarantine period of 14 days, where they will be housed in an NHS staff accommodation block with access to the internet.

Anyone with suspicious symptoms will be taken to the Royal Liverpool and Broadgreen Hospital.

On Wednesday night, an apartment-hotel in Yorkshire was put on lockdown when a man, understood to be a Chinese national, was taken to hospital after falling ill.

The man, who was a guest at the Staycity Hotel in the centre of York, was taken to hospital, together with family members.