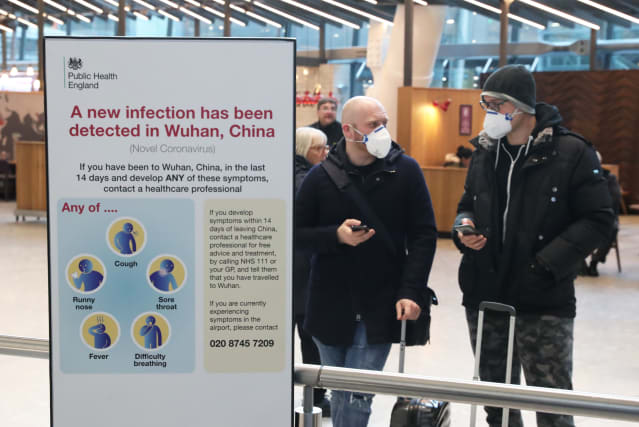 Britons on an evacuation flight from the Chinese city at the centre of the coronavirus outbreak are expected to land in the UK on Friday morning.

Their arrival comes after the UK’s four chief medical officers raised the risk level of the illness from low to moderate and the World Health Organisation (WHO) declared an international public health emergency.

So far, the virus has caused 170 deaths, although there have been none outside of China. There have been 7,736 diagnosed cases, but only 82 cases in 18 other countries.

Upon their arrival at RAF Brize Norton in Oxfordshire the passengers on the evacuation flight, who have mainly been in Wuhan and the surrounding Hubei province, will be taken to an NHS facility on the Wirral for a quarantine period of 14 days.

It is understood they will be taken to a former student accommodation block in the grounds of Arrowe Park Hospital, where passengers will have access to the internet in order to contact relatives.

The flight, which had military medics on board, was scheduled to depart Wuhan city at approximately 7am local time on Friday – 11pm Thursday UK time.

Fifty foreigners, mainly from EU countries, will also be on the evacuation flight which will head to Spain afterwards.

On Thursday evening, WHO declared coronavirus as an international public health emergency due to fears of the virus spreading to countries with weaker health infrastructure.

As of Thursday, 161 people have tested negative for the virus in the UK and 124 people have recovered and have since been discharged from hospital in China.

In a letter following WHO’s announcement, the chief medical officers of England, Wales, Scotland and Northern Ireland said: “In light of the increasing number of cases in China and using existing and widely tested models, the four UK chief medical officers consider it prudent for our governments to escalate planning and preparation in case of a more widespread outbreak.”

They added that it is “likely” there will be individual cases in the UK, but that they are “confident in the ability of the NHS and HSC in Northern Ireland to manage these in a way that protects the public and provides high-quality care”.

Officials had been working to secure a flight out of Wuhan for British nationals after one planned for Thursday failed to get clearance from Chinese authorities.

British nationals were reportedly asked to make their own way to the airport on Friday, and some passengers said they were told only to take hand luggage on the flight.

Foreign Secretary Dominic Raab said officials had “been working tirelessly” to get citizens out of Wuhan, and the PA news agency understands that the FCO tried to ensure families can remain together and relatives with dual citizenship are allowed on the flight.

British citizen Chris Hill, who lives in Wuhan with his wife and four-year-old daughter, told PA he refused to take the offered flight as the FCO could not confirm he would be able to bring his daughter Renee with him as she is a Chinese citizen.

“With the current situation and the way the FCO is handling the diplomatic side of things, I’m just losing faith,” Mr Hill said.

The Chinese government does not recognise dual nationality, and it is thought that people with Chinese citizenship were unable to leave the affected area.

PA understands the Chinese government later relaxed its policy on whether dual nationals and dependents could board the repatriation flight.

3 Tips On How To Best Get Rid Of Spots

This museum houses the craziest, rarest and best Corvettes ever made