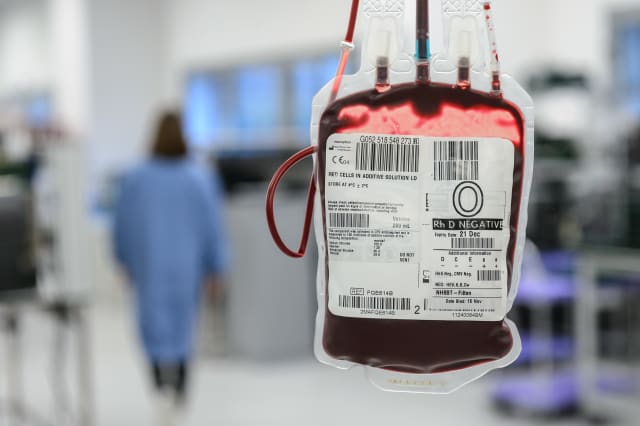 Campaigners have said the Government should be “ashamed”, after ministers refused to commit to compensation proposals for victims of the infected blood scandal.

People who were infected or have been affected by the scandal met Cabinet Office minister Oliver Dowden and health minister Nadine Dorries in London on Tuesday.

The contaminated blood scandal has been called the worst treatment disaster in the history of the NHS, leaving thousands of patients infected with hepatitis and HIV, and causing many early deaths.

Campaigners said they were seeking a Government commitment to immediately begin working on a compensation framework, similar to one in the Republic of Ireland.

But Jason Evans said the proposal put forward by his Factor 8 group were “firmly rejected” by the ministers.

Mr Evans, whose father died in 1993 having contracted hepatitis and HIV, added: “It was an unequivocal no.

“There was no reasonable explanation given and so once again victims and families have come here – many in ill health – and they were optimistic about today.

“They have been led up the mountain top again only to be brought back down – no solution, no further forward, and as a result, if the Government maintains that position, hundreds of people will die over administrative paperwork years.

“I think the Government should be ashamed today.”

Mr Evans said that the proposals put forward would have had no “capital cost” for the Government.

He added: “Our proposal to the Government bore no capital cost whatsoever and was simply a matter of engaging with our community, but ministers refused this whilst offering up no reasonable explanation for doing so.

“I would urge the Government to re-think this extremely mean-spirited position, which has only broken any sense of trust that may have been built in recent months.”

The Compensation Tribunal was set up in the Republic of Ireland in 1995 and became a statutory body two years later, to compensate people infected with hepatitis C.

In 2002 it was expanded to include people infected with HIV through contaminated blood products.

Infected blood support schemes were set up across the UK in 2017 – with country-specific programmes in Scotland, Wales, England and Northern Ireland.

The England Infected Blood Support Scheme supports people historically infected with hepatitis C or HIV from NHS blood or blood products, as well as helping families, spouses and civil or long-term partners after the death of someone infected.

But Des Collins, senior partner at Collins Solicitors, representing more than 1,400 people in relation to the Infected Blood Inquiry, said that the system in England was more like “benefits” than compensation.

He added: “The Government has made payments without admitting liability.”

Mr Collins said the Government was being “intransigent” and added: “Today the Cabinet Office have said that their hands are tied in relation to the issue of paying compensation, because of the ongoing public inquiry.

“This couldn’t be further from the truth. The inquiry cannot determine civil or criminal liability – nor can it award compensation.

“It is a terrible missed opportunity that will have a real impact on those affected’s lives.”

A Cabinet Office spokesman said: “The infected blood scandal should never have happened and we established this inquiry so that all those who suffered can get the answers they deserve.

“Campaigners raised a number of issues about the support that would assist them outside of the inquiry process.

“Ministers have committed to looking at these issues carefully and to report back on where rapid progress can be made.”