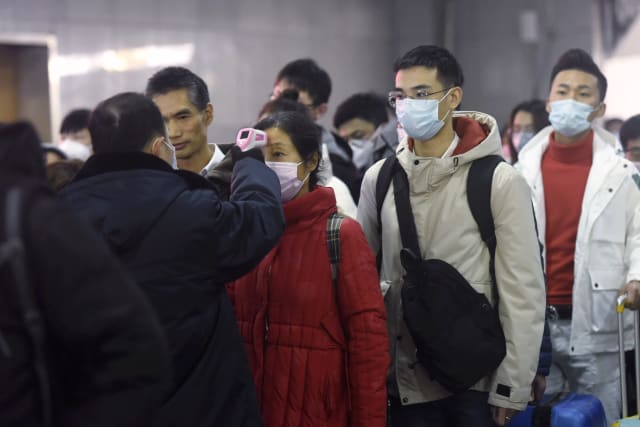 The NHS is “ready to respond appropriately” to any cases of coronavirus that emerge in the UK, Health Secretary Matt Hancock has said.

In a statement to the Commons on Thursday, he said that while “there is an increased likelihood that cases may arise in this country, we are well prepared and well equipped to deal with them”.

On Wednesday night, China suspended all flights, including international services, out of Wuhan city – the epicentre of the virus outbreak.

Another city close to Wuhan, Huanggang, is also on lock-down as officials try to contain the spread of the virus.

Mr Hancock told MPs there had been 571 cases of coronavirus and 17 deaths confirmed by the Chinese government.

He told how cases of the virus have also been reported in Thailand, Japan, South Korea and the US.

Mr Hancock said “most people” affected have experienced cold and flu symptoms, though some cases have proved fatal.

“We have been closely monitoring the situation in Wuhan and have put in place proportionate, precautionary measures,” he said.

He said England’s chief medical officer, Professor Chris Whitty, is in contact with international experts and his counterparts to monitor the situation.

Mr Hancock said: “The chief medical officer has revised the risk to the UK population from very low to low, and has concluded that while there is an increased likelihood that cases may arise in this country, we are well prepared and well equipped to deal with them.

“The UK is one of the first countries to develop a world-leading test for coronavirus, the NHS is ready to respond appropriately to any cases that emerge, clinicians in both primary and secondary care have already received advice covering initial detection and investigation of possible cases, infection control and diagnostics.

“The public can be assured that the whole of the UK is always well prepared for these type of outbreaks and we will remain vigilant and keep our response under constant review in light of emerging scientific evidence.”

Experts from the World Health Organisation (WHO) are meeting again on Thursday to decide whether to declare a global public health emergency over the virus.

Chinese state media said train stations and airports in Wuhan have been closed, while ferries and long-distance buses have been stopped.

Gauden Galea, the WHO’s representative in China, said: “To my knowledge, trying to contain a city of 11 million people is new to science.

“It has not been tried before as a public health measure. We cannot at this stage say it will or it will not work.”

The People’s Daily newspaper in China also reported Hong Kong has had its first confirmed case of the illness.

In the UK, there are three direct flights a week from Wuhan to Heathrow, landing at around 6pm on Monday, Wednesday and Friday.

Under measures announced on Wednesday by the Government, the planes will be taken to an isolated area of Terminal 4 after landing.

Meanwhile, the Foreign and Commonwealth Office has updated its travel advice for China, with a spokesman saying: “In light of the latest medical information, including reports of some person-to-person transmission, and the Chinese authorities’ own advice, we are now advising against all but essential travel to Wuhan.

Asked whether it is possible the virus has already reached the UK, Prof Ferguson said he could not rule it out.

Explaining why there is global concern about the virus, Dr Josie Golding of the Wellcome Trust said it is because so little is known about it and vital information is “missing”, like how easily it can be transmitted and where it is coming from.

Dame Judi Dench: Arts funding is welcome but will be spread thin