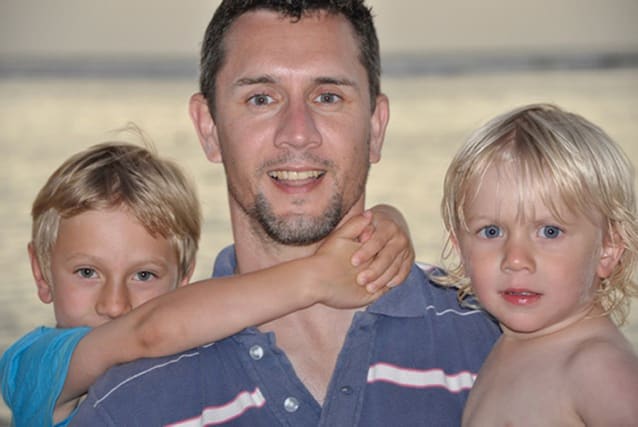 A father of two with an incurable form of blood cancer is releasing a charity single, backed by comedian Al Murray, in a bid to find a donor.

Peter McCleave was diagnosed with myeloma in March 2017 and given seven years to find a matching blood stem cell donor.

Since then, campaigning by the 41-year-old from Bunbury, Cheshire, has led to more than 33,000 potential donors registering their details and raised more than £70,000 for the blood cancer charity DKMS.

He has now teamed up with singer-songwriter Lee Gordon to release a charity single in the hope that he will find a match for himself and others.

The Tide, written and performed by Gordon as a tribute to blood cancer patients, takes listeners through the three years since Mr McCleave’s diagnosis.

Mr McCleave said: “DKMS told me that since working with me more than 33,000 people have signed up with them because of my appeal. It’s crazy, but I’m so thankful.

“I know we aren’t there yet as there just aren’t enough donors for everyone who needs one.”

He continued: “People are needlessly dying and families are being deprived of loved ones through a lack of blood cancer donors.

“I hope The Tide will save lives by raising awareness and will hopefully encourage more people to take the first step in becoming a potential lifesaver for someone with blood cancer.

“With a bit of luck, I might just find my own match too.”

In November, comedian Murray revealed his nephew Finley had been diagnosed with juvenile myelomonocytic leukaemia (JMML), a rare type of blood disorder that occurs in young children.

The six-year-old’s only hope of a cure is a bone marrow transplant and Murray has been urging people to sign up to the blood stem cell register.

He said: “It’s unfathomable that Peter still hasn’t found himself a match, despite his relentless search for one. He is a man with boundless energy who refuses to give up.

“So far he’s found 12 confirmed donors for other people with blood cancer. I think it’s amazing that he’s releasing a charity single with proceeds going to DKMS.”

It costs the charity around £40 to register someone on the database. The new single costs 99p.

Murray added: “That’s a small price to pay to help someone like Peter and the many others with blood cancer, including my own nephew Finley. And I know they’d be eternally thankful to you.”

Every 20 minutes someone in the UK is diagnosed with a type of blood cancer. It is the third most common cause of cancer death in the UK.

None of Mr McCleave’s family members were a match when tested and his Portuguese and Macanese heritage means he has a reduced chance of finding a suitable donor.

People from a black, Asian or other minority ethnic (BAME) background currently make up 14% of the registry and only have a 20% chance of finding the best possible stem cell donor match, compared with 69% for those from northern European backgrounds.

People can order a home swab kit from DKMS so their details can be added to the register.

The single is released on January 24.