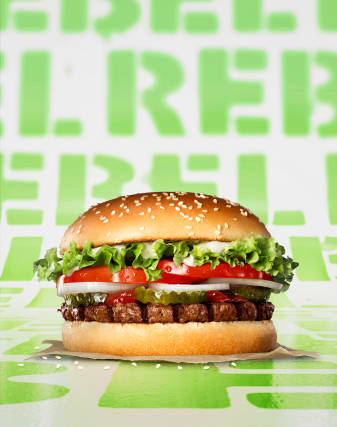 A plant-based version of Burger King's Whopper will be available in UK restaurants from Monday.

But the Rebel Whopper, which is made from soy, is not suitable for vegans or vegetarians because of the way it is cooked.

Instead it is being aimed by the fast food chain at "flexitarians" – people who eat meat but are cutting down on the animal-based food they eat.

Burger King marketing director Katie Evans said: "This really is a game changer – we wanted our first plant-based Whopper to replicate the indulgence and flame-grilled taste of the real thing as closely as possible, and we're thrilled with the result.

"We're delighted to satisfy the demand for this highly-anticipated product and finally bring the Rebel to the UK."

The soy patty, made with the Vegetarian Butcher, is served with tomatoes, lettuce, mayonnaise, ketchup, pickles on a seeded bun.

It is not suitable for vegetarians because it is cooked on the same grill as the restaurant's beefburgers, but it is hoped it might encourage some meat eaters to cut down on their meat consumption.

Toni Vernelli, international head of communications and marketing at Veganuary, said: "For all of the important issues that Veganuary – and most vegans – are trying to address through their food choices it makes absolutely no difference whether the plant-based patty is cooked separately or on the same grill as the meat.

"What does make a big difference to animals and the planet is when non-vegans choose a plant-based menu option, enjoy it and then order it again.

"And that's exactly who Burger King's plant-based Whopper is aimed at, flexitarians who want to reduce their meat consumption for health or environmental reasons, or are considering going vegan."

The Rebel Whopper, already available in Ireland, goes on sale to anyone in the UK with the Burger King app from Monday, and to everyone from Wednesday.