Why are nurses and healthcare workers in Northern Ireland striking? 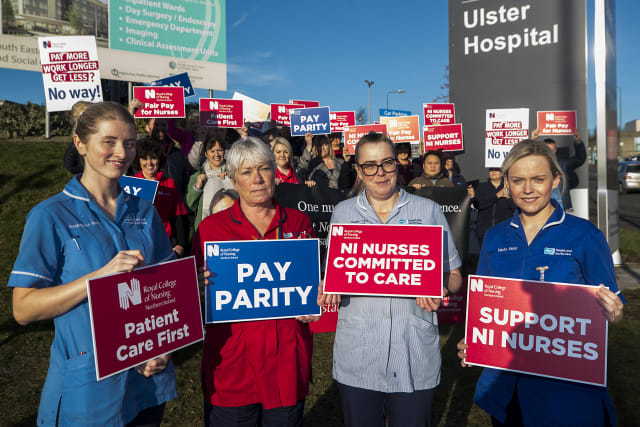 Thousands of nurses and healthcare workers are to walk out for 12 hours today in a row over pay, the first strike in the Royal College of Nursing’s 103-year history.

– Why are they taking the action?

The RCN union says its members are angry that their pay has not kept up with counterparts in the rest of the UK.  More than nine out of ten supported the strike action.

The RCN also believes staffing levels are too low – there are around 2,800 vacant posts – and claims the logjam preventing Stormont devolved powersharing from returning has stymied efforts to resolve the situation.

Stormont’s Department of Health has offered an extra £51 million. Its senior civil servant, Richard Pengelly, said it was as far as he could go in the absence of ministers to take decisions on re-financing the NHS as well as ordering much-needed reforms.

The Northern Ireland Secretary, Julian Smith, believes the action illustrates why it is important that powersharing is restored. He is leading political talks which he hopes will lead to a restored ministerial Executive early next year.

– But what did devolved ministers do when they were in post?

In 2017 Westminster agreed a pay deal involving a raise over three years for workers but it was not implemented in Northern Ireland.

– What condition is the health system in Northern Ireland in?

In 2016 former Stormont health minister Michelle O’Neill outlined a 10-year vision for transforming care based on recommendations from a Government-commissioned report called the Bengoa Report.

That review called for ring-fenced money to transform how services are delivered as well as a range of other changes.

Since then, Northern Ireland’s waiting lists for routine care have stretched and thousands of patients are waiting more than a year for an appointment.

– What are the nurses doing today?

They have established picket lines outside hospitals and health facilities across the country. They have received the support of ambulance paramedics and other unions representing health service workers including Unison, Unite and NIPSA.

Picket lines were established at midnight outside major hospitals including the Royal Victoria and Ulster in Belfast as well as elsewhere in Northern Ireland, with the nurses strike starting at 8am on Wednesday.

– What will the effect be on patients?

The health service has said it is anticipating major disruption. Some routine surgeries will not go ahead as planned and many day procedures will be cancelled.

Ambulance crews will continue to respond to the most serious calls. Cancer care will still be provided.

Victoria Derbyshire condemns BBC over reason for axing her show

Kid Performs Backflip and Lands By Reclining On His Side

Man Cuts A Row Of Bottles Filled With Colored Water

Guy Walks On The Edge Of A High Rise Rooftop