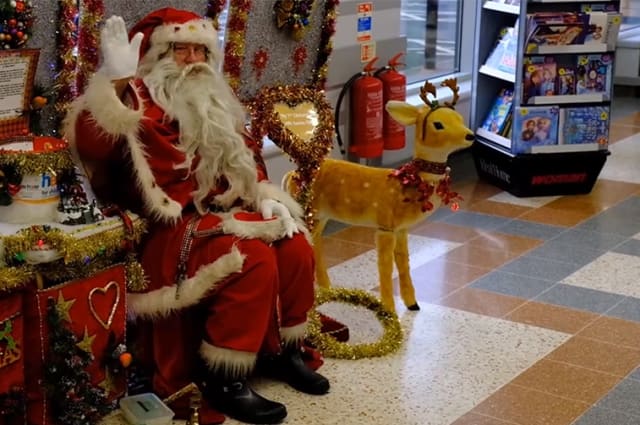 Britain's longest-serving Santa Claus is still bringing the magic of Christmas to children after donning his festive red suit for almost 60 years.

Ray Hulse, 75, has given out thousands of gifts to gleeful kids to make their dreams come true since pitching in as a stand-in Santa in 1962.

He was 18-years-old when he was asked to appear at a children's Christmas party and has never looked back since.

Ray has spent almost six decades appearing at hundreds of hospitals, schools and supermarkets as Father Christmas, raising over £55,000 for charity.

He makes sure he always travels in style and has seen his sleigh pulled by a horse, a canvas-top Land Rover, and a pony and trap over the years.

Ray says he has always loved Christmas and will even try and keep going until his 100th birthday.

Ray, of Bridgnorth, Shropshire said: "It brings so much magic to so many boys and girl, and at the same time raises money for a good cause."

"Christmas is a magical time for children. When a stranger's child runs up and slings their arms around you - the warmth of that is such a blessing."

"I've gone from being pulled around on a horse and trap to having a Land Rover with a 'SANTA 1' number plate on the roof and two speakers."

"It's also fitted with 200 LED lights that change sequence which brings a bit of added sparkle."

"I find it very rewarding and I'll keep on doing it for as long as I can."

"When people tell me I am the longest-serving Santa in Great Britain, it motivates me to keep going. Its nice to know I have a made a difference."

When he was originally asked to appear as Santa at a local village hall aged 18, he said no.

He added: "I did it in the end but I was reluctant and had to borrow the outfit from someone. It turned out that I really enjoyed it."

"Afterwards, when I got changed the kids said to me, 'You were Father Christmas, weren't you?'"

"I obviously denied it until they pointed out the colour of the socks and shoes I was wearing were the same as Santas."

"I then had the costume specially made. I went from being a simple Father Christmas to Santa Claus."

"I went to an antique fair and I bought old spectacles to bring the character to life."

For the past 29 years, the retired tyre fitter and ex-miner has been raising funds for Hope House Children's Hospices, which support sick children.

The grandfather-of-one decided to start raising money for terminally ill children following the loss of his son Nicholas in 2012.

The dad-of-two, said: "I think he would be proud of me now. I'll keep on till I turn 100 if I can. Just to bring joy and happiness to the children is great."

"I try to involve the parents. I'll ask the kids if they had a real fire, then if they say 'yes', I'll ask whether it was lit by their mummy or their daddy."

"Sometimes I'll joke with them, and tell them that they were naughty last year because their mummy or daddy left the fire burning and I burned my bum."

"Or I'll tell them I came down their chimney and got covered in soot and the elves had to repair my trousers and they weren't very pleased."

"A lot of modern houses don't have chimney pots, so I tell the children that Santa has a magic key."

"It's those little touches that make it special for them. It means I am out most days in December being Santa Claus, but I love it."

The pensioner's favourite memory from the last five decades is of being dressed up as jolly Saint Nick one Christmas morning in the 1960s.

Ray said: "I was walking up Ludlow Road with a pony and trap and it was when they had the old milk churns, back in the 1960s."

"There was a man with the milk churn on the back of a lorry coming down the Ludlow Road, delivering milk."

"He stopped and slapped the side of his face and said 'Am I really seeing Father Christmas walking up the road with a pony and trap?'"

"Ray says his desire to spread a bit of festive cheer comes from having a sad childhood which has driven him on for the last 57 years.

He added: "Every life is precious but I was an unwanted child. My mother never said she loved me or even had a photograph of me anywhere in the house."

"That's even more reason why I do it, to give back to children what I didn't get myself."

"If I can bring that joy to them, well, then that's what it's all about."