Mother and babies ‘doing fine’ after sextuplets born in Poland 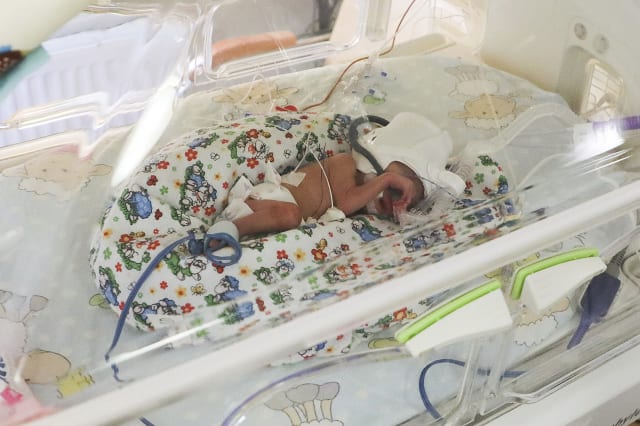 A Polish mother who gave birth to sextuplets has visited her babies who doctors say are doing fine.

The four girls and two boys were born prematurely on Monday in the 29th week of pregnancy by cesarean section in Krakow, southern Poland.

Doctor Ryszard Lauterbach at the University Hospital said the babies were "born in a condition surprisingly good for sextuplets", but their respiratory, nervous and digestive systems are immature and require medical care.

The sextuplets were a surprise to the family — their mother, 29-year-old Klaudia Marzec, said they were not expecting six but five babies.

"We have made some logistical plans at home for five, but now they will need to be changed," Ms Marzec said. "Now we just want them to leave hospital in the best condition possible."

They were conceived naturally, the hospital said. Ms Marzec and her partner already have a two-and-a-half-year-old son.

The babies, whose individual birth weights ranged from 1.96 pounds to 2.86 pounds, are in incubators.

Doctors say the little ones can breathe on their own but are likely to remain in hospital for around three months.

Hospital director Marcin Jedrychowski called the operation an "extremely difficult" one that involved up to 40 doctors and medical personnel.

The surprise sixth girl had a moment of warm physical contact with her mother before a sixth incubator arrived for her, according to Dr Lauterbach.

The boys' names are Filip and Tymon and the girls were named Zosia, Kaja, Nela and Malwina.

Their father, Szymon Marzec, said their arrival was a "great joy, but we also have plenty of concerns".

"We are happy that the kids are in the best hands possible, and all that we can give them now is our love and presence near them."

Only one in about 4.7 billion spontaneous pregnancies leads to sextuplets, the hospital said.

You Can Now Visit A Chocolate Village In Slovenia

This Is The World's Highest Settlement

People Are Freeze Drying Their Pets