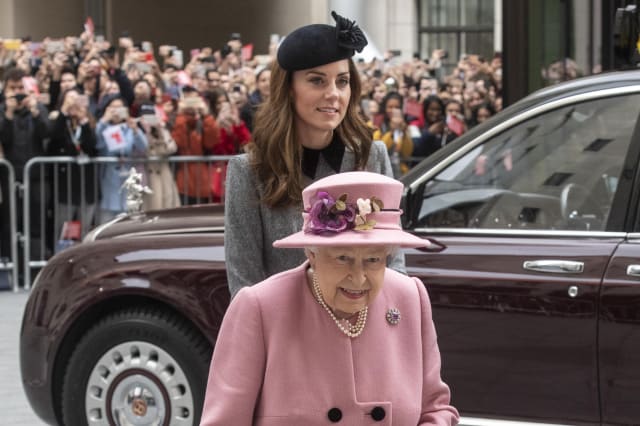 The Duchess of Cambridge never fails to look great when out and about.

But it seems the future Queen may be getting some fashion advice from an unlikely source.

According to reports at the weekend, none other than The Queen herself is weighing in with sartorial tips for her daughter-in-law.

Kate and Meghan
Kensington Palace asks for Instagram's help after social media abuse of Duchesses Kate, Meghan: Report (ABC News)
William, Kate, Meghan and Harry walk to the Christmas Day church service in Sandringham [Photo: Getty]
Hunting and feasting: How Kate, Meghan and the rest of the Royal Family spent Boxing Day 2018
When most of us find an outfit we love, we rock it time and time again. Although Kate Middleton and Meghan...

Their unexpected exit was "quite unusual," according to a source.

Kraliyet Ailesi'nde Kate-Meghan krizi!
Sarah Ferguson Says Princess Diana Would Have Been Proud of Her Daughters-In-Law, Kate & Meghan
Two new family photos have been released - and they're adorable.

They were relegated to the second row.

For their first solo engagement without their husbands , Meghan Markle and Kate Middleton, Duchesses of Sussex and Cambridge, attended...
The first official photos of the Duke and Duchess of Sussex have been released, Chrissy Teigen shares hilarious photo of realities of being a new mom, Katy Perry has shared her thoughts on the royal wedding dresses and is Team Kate, Meghan Markle broke tradition at the royal wedding reception. Get all of the details at MarieClaire.com!
Up Next

So what is the monarch suggesting? Find out in the video above.

Jude Law: I feel optimistic about theatre’s future despite pandemic