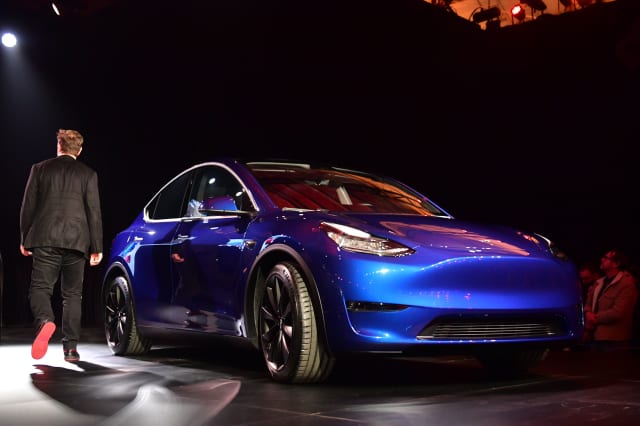 Tesla has unveiled its new Model Y – a compact, budget-friendly electric crossover that will serve as the Model 3's slightly bulkier sibling.

Justifying that price tag is the Model Y's larger body. It's shaped as a compact crossover, giving it a high-set driving position, hatchback rear and space for seven passengers.

The car's design is similar to other models in the range, particularly the Model 3 and Model X. The truncated rear end helps aerodynamics, while Tesla's bold decision to leave the car's front virtually featureless lends it a clean if curiously empty look.

The Model Y does without the Model X's distinctive 'falcon-wing' rear doors, instead using traditional hinged offerings with frameless windows like the Model S and 3.

A choice of four powertrain configurations are likely to be offered, with Long Range, Dual Motor and Performance arriving first. All offer serious acceleration and impressive range for a pure-electric car.

The Long Range model is expected to offer 300 miles of range, while four-wheel drive Dual Motor and Performance versions will get 280 miles. The latter will hit 60mph from rest in just 3.5 seconds. These are all slightly worse figures than the smaller Model 3, befitting the Y's status as a slightly bigger and more aspirational car.

The Model Y will feature the same headline technology available across the rest of the Tesla range. This includes access to Tesla's super-quick Supercharger network, which can add 75 miles of range in just five minutes.

There's also Tesla's Autopilot suite, which offers monitored self-driving in certain situations. Musk has said that cars fitted with Autopilot hardware will be able to drive themselves completely autonomously in the future.