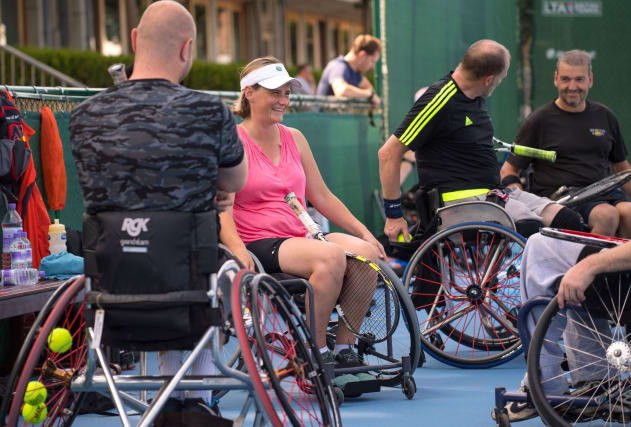 A former Army officer left in agony after injuring her foot chose to have her lower leg amputated rather than live with the unbearable pain.

Cornelia Oosthuizen, 39, lived in agony for nearly five years – taking up to 12 pills a day to stave off the pain – before making the drastic decision.

The full-time athlete, who also runs her own business, now has her sights on a place in the wheelchair tennis team at the 2020 Paralympics in Tokyo.

Ms Oosthuizen, who lives near Salisbury in Wiltshire, was competing in the Army’s annual tennis competition in 2014 when she hurt her right foot but put it down to a sprain and assumed it would get better in a few weeks.

After six months of constant pain and undergoing various scans and X-rays she was diagnosed with Complex Regional Pain Syndrome (CRPS), a condition thought to be caused by nerves telling the brain a part of the body hurts, even if it is no longer injured.

Eventually the pain meant she had to leave the Army and despite concerns from some doctors she decided to have her lower leg amputated.

“It was becoming intolerable to live with and because of my relative young age and relative good health I thought I can’t live like this,” Ms Oosthuizen said.

“This was very much a last ditch effort to see if this would make it better and if it didn’t work I would just have to accept living with the condition.

“After three-and-a-half years I sat down and gave it proper thought and speaking to medical professionals and some other people that had amputations with this condition I decided to go ahead.”

She recorded her 18-month journey to the amputation in a documentary for the BBC, which interviewed a pain expert and a Paralympian, who had undergone a similar operation, and both warned against the surgery.

But Ms Oosthuizen said that before undergoing the NHS surgery at Salisbury District Hospital in November last year she was assessed by three independent panels.

“The broader advice is not to have it done because statistically it doesn’t always work for lots of people, so it is a very big risk to take,” she said.

“I was content that probability wise I stood a relatively good chance. So far it has paid off and fingers crossed.

“Realistically I need to give it a two year window before I can be super confident that it has been successful.

“This is because some people respond very well initially post-amputation but then further down the line things crop up.

“Some people respond not so well at the beginning but further down the line they do respond better. It is a bit of a luck of the draw.

“Until we have reached the two year window I am going to be cautiously optimistic that it has gone well. It has made a big difference so far and fingers crossed.”

Ms Oosthuizen featured on BBC Inside Out West this week and the documentary is available on iPlayer at www.bbc.co.uk/iplayer/episode/b0c06k8h/inside-out-west-21012019.

Book a stay at this affordable, luxurious private island

This popular internet dieting concepttea is not recommended by dieticians

Stuck Inside? Take A Virtual Tour Of Aquariums, Nature and More