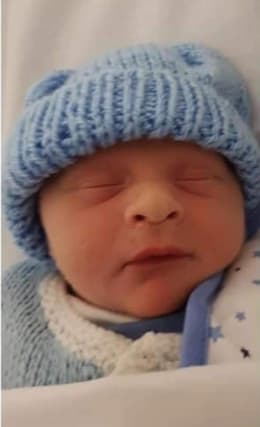 A baby whose parents started a social media campaign in a desperate bid to find him a new heart has died.

Carter Cookson, who was born prematurely on Boxing Day, passed away at 5.44pm on Saturday, his mother Sarah Cookson said.

She and her husband Chris, from South Shields, South Tyneside, took to Facebook in the days after Carter's birth in the hope of finding him an organ donor that could have saved him.

The couple had already been through the heartbreak of losing their first son Charlie, who died aged two in 2013, which led them to set up a charity.

"Today he could not fight anymore... at 5.44pm our brave baby boy Carter John Cookson gained his angel wings and flew into his big brother's arms.

"We are heart broken....our two boys are in heaven without their Mammy and Daddy we feel so empty and our hearts will never recover.

"No more pain baby boy, No more tubes..be free with your big brother and Granda...until we can all be together again. You have taken our hearts with you..... we will never recover.

On Friday night, the couple had said they were trying to focus on spending time with Carter, who they feared only had days to live, at the Freeman Hospital, Newcastle.

Their Facebook post read: "Our hearts are breaking... as once again no phone call... and another day closer to losing our baby."

Thousands of people posted their condolences on the social media site beneath a final photograph of Carter.

After Charlie's death, the couple set up the Charlie Cookson Foundation in a bid to support other families with seriously ill children.

Carter underwent surgery a week after his birth, but the operation to drain one side of his heart and install a pacemaker was unsuccessful.