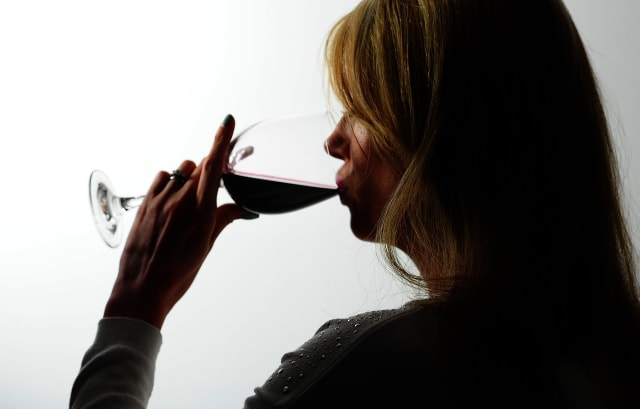 Moderate drinking has been linked to a lower risk of heart disease in a new study.

But the finding was most pronounced among people who drank moderately in a consistent way - those who had unstable drinking patterns were more likely to suffer from coronary heart disease (CHD).

The reserach, published in the journal BMC Medicine, examined data from six studies, including five from Britain, which examined people's drinking patterns and their risk of developing CHD.

Data on more than 35,000 people was obtained, and they were tracked for an average of 12.6 years.

Overall 5% suffered a CHD "event" during the follow-up period.

Alcohol intake was assessed at three different periods of time and then researchers used this data to determine each person's 10-year alcohol intake trajectories.

The authors found that former drinkers had a significantly higher risk of CHD compared with drinkers who "always adhered to lower-risk intake guidelines".

Among women, non-drinkers also had an increased risk compared with people who were "consistently moderate" in their drinking habits.

But the researchers cautioned that stability of drinking patterns was an important factor - those who drank moderately, but not persistently so, had a greater risk of developing CHD compared with those who consistently drank moderately.

"Overall, the findings from this study support the notion of a cardioprotective effect of moderate alcohol intake relative to non-drinking," the authors, led by experts from University College London, wrote.

"However, crucially, stability in the level of alcohol consumption over time appears to be an important modifier of this association."

Commenting on the study, Ben Butler, spokesman for Drinkaware, said: "In the UK, coronary heart disease causes around 66,000 deaths each year.

"Regularly drinking too much can increase the risk of high blood pressure, one of the key risk factors for having a heart attack or stroke. Heavy drinking also weakens the heart muscle which means that the heart cannot pump blood as efficiently.

"Drinking less alcohol can lower your risk of developing serious heart problems, as well as helping you to lose weight, which in turn reduces your risk of heart disease and stroke."

Guidance from the British Chief Medical Officers states that to keep health risks from alcohol to a low level it is safest not to drink more than 14 units a week - the equivalent of six pints of average strength beer.

People who drink this much should spread their drinking over at least three days.

Even just one or two heavy drinking sessions a week can increase a person's risk of death from long-term illness and from accidents and injuries.

The guidance also warns that the risk of developing a range of health problems - including cancers of the mouth, throat and breast - increases the more a person drinks on a regular basis.

Commenting on the study, Naveed Sattar, professor of metabolic medicine at the University of Glasgow, said: "The headline message misses the fact that a much bigger recent study published in the Lancet has shown that whilst risk for myocardial infarction may well be lower with modest alcohol, risk for other complications of the heart and brain increase with even moderate drinking.

"Indeed, drinking about the recommended levels of around five drinks per week was linked to increased risks of stroke, fatal aneurysm, heart failure and death.

"In short, no-one should start to drink or drink more to protect their hearts. The totality of evidence does not support alcohol as a measure to improve overall risks."