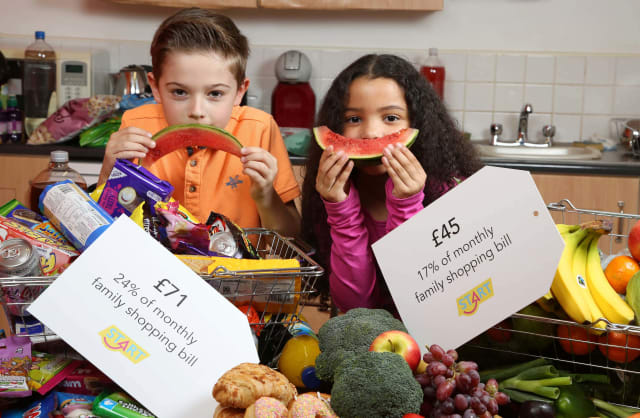 Families in Northern Ireland spend four times as much money on so-called "treat" foods than fruit and vegetables, according to new data.

Almost a quarter (24%) of the average weekly food budget went on highly processed items like crisps, chocolate and sweets - compared with just 10% on fruit and 7% on vegetables and prepared salads, the Food Standards Agency and Safefood found.

Dr Cliodhna Foley-Nolan, director of human health and nutrition with Safefood, said: "While we all love to treat our kids and grandkids, highly processed foods such as crisps, chocolates and sweets, which are full of empty calories, have become a staple in our weekly shop.

"Unfortunately they're a norm in our children's daily diet and they are not seen as a real treat any more."

The data looked only at weekly supermarket shops and did not account for convenience purchases in outlets such as garage forecourts, cafes or cinemas.

Sharon Gilmore, head of standards and dietary health at the Food Standards Agency, said: "These foods and drinks are mostly high in fat, sugar and salt, and we recommend eating them less often and in small amounts.

"We should all aim to eat a varied and balanced diet based on the Eatwell Guide, which includes at least five portions of fruit and vegetables a day.

"This will help children feel their best and make a big difference to their long-term health."

The data has been released as part of the START campaign - a five-year public health awareness drive aimed at encouraging families to pursue a healthier lifestyle.

Mary Black, assistant director for health and social well-being improvement at the Public Health Agency, said: "Changing the way that we and our children eat can be difficult, but over time, by making small daily changes, you can have a positive impact on your health.

"For instance, swapping a sugary drink for milk or water, or instead of reaching for the crisps, try some plain popcorn as a snack.

"In addition to making healthier snack swaps, it's also important to recognise that children only need kid-sized portions. At meal times, using a smaller plate for children is a good way of making sure you don't serve up too much."

To find out more about the START campaign and ways to make a healthy, positive start visit www.makeastart.org.