The most asked questions about the London Marathon answered 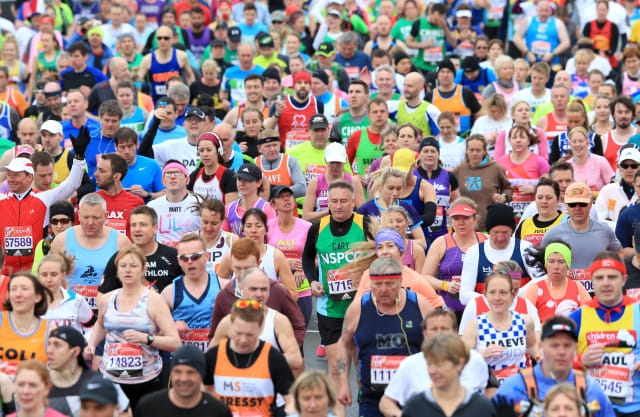 In just two days' time, more than 39,000 runners will descend onto the streets of the capital to take part in the London Marathon.

Sunday's race is expected to be the warmest on record with highs of 23 degrees Celsius forecast, and organisers are urging runners to take extra precautions to stay cool and hydrated.

Whether you're looking to beat your personal best this year as a race day participant, or you're a spectator on the sidelines, it's time to start thinking about those last-minute logistics so you can run your best, beat the crowds and enjoy one of the biggest events in the running calendar.

With that in mind, we've answered some of the most-asked questions about the marathon. Here's everything you need to know.

What time does the London Marathon start?

This year's race takes place on Sunday April 22. As with previous London marathons, the start times for different events are staggered. The klaxon will sound on the elite wheelchair races at 08.55, the World Para Athletics Marathon World Cup is at 09.00 and the elite women's race begins at 09.15.

The elite men's race, British Athletics & England Athletics Marathon Championships, and the mass race, all start at 10am.

The start line in Blackheath will have screens streaming live coverage of the Queen pushing the start button at 10am from the grounds of Windsor Castle.

What is the London Marathon route?

The 26.2 mile marathon route starts south of the river and winds through central London, taking in some of the capital's most famous landmarks. Runners begin at Blackheath and head east for three miles to Woolwich, before turning west and passing Cutty Sark. The route then crosses Tower Bridge, looping around the Isle of Dogs and past Canary Wharf, before heading west through Limehouse, Shadwell and Tower Hill. The scenic home straight, at mile 23, runs alongside the River Thames, taking in Monument, Blackfriars, Waterloo Bridge and Embankment, before bringing runners to the foot of Parliament Square.

The race finishes on the Mall in front of Buckingham Palace. There is a meet and greet area where runners will be able to rendezvous with friends and family at one of the meeting points on The Mall and in Horse Guards Road and Horse Guards Parade. These points will be marked with letters of the alphabet, so runners and spectators can join up at their family initial or another pre-arranged letter.

What should I eat before a marathon?

Different runners swear by different race day breakfasts, but if you're thinking about skipping the first meal of the day entirely, you might want to rethink your strategy.

"Many people think that eating before exercise is wrong. However, it has been shown that it can actually enhance your performance," says Sarah Flower, a nutritionist from Power Health. "Get up early on the morning of the marathon and enjoy a breakfast consisting of complex carbohydrates, leaving at least 1-2 hours before your run for your food to go down.

"You will need these complex carbohydrates during the marathon, as your body stores roughly 500g of glycogen, which will last on average about half a marathon before it is entirely depleted.

"Opt for foods such as porridge oats, which are a great low complex carbohydrate option and can also help settle any nerves or nausea that you may be feeling just before the race."

How much water should I drink before the marathon?

You'll want to make sure you drink enough fluids to keep you hydrated at the start of the race, especially in this year's warm weather.

"Make sure you drink around 400-500 ml of fluid before the start of the race," advises Johanna Hignett, a registered nutritionist and adviser to the Natural Hydration Council. "Don't be tempted to drink much larger quantities as this may make you feel bloated or needing the bathroom."

"You should then drink water approximately every 20 minutes and take the opportunity to get additional bottled water at the water stations on the course," Hignett advises. "Sip the water throughout the race as you run, rather than gulping down larger quantities."

How long does it take to train for a marathon?

Most marathon training plans range from 12 to 20 weeks, but beginners who are running the marathon for the first time are advised to pack in three-to-five runs per week over the four months leading up to the big day.

"If you are already moderately active and pain free you can train for a marathon in about 20 weeks," says personal trainer Nicola Addison. "However, the longer you can prepare your body for the event ahead, the better."

Where are the London Marathon water stations?

Buxton Natural Mineral Water stations will be positioned every mile after mile three through to 25, apart from miles seven and 11, where Lucozade Sport energy drinks will be available. Lucozade will also be handed out to runners at miles 15, 19 and 23, while Lucozade Sport Carbo Gel stations can be found on The Highway at miles 14 and 21.5.

Three drinks stations will be trialling compostable cups instead of bottles this year, in an effort to cut down on plastic. Race organisers advise that runners practise drinking from a cup in training before the event.

How to enter the London marathon?

There are a few options - entering the ballot, getting a charity place, with club entry or qualifying with a fast enough time. The chances of getting a ballot place are slim, this year a record 386,050 people entered it.

Most major charities have a set number of marathon places available to runners. Charities will looking for people who can raise enough money and who have a connection to the cause. Many expect their runners to raise at least £1,500.

Athletics clubs associated with British Athletics are able to apply for a number of club entries, based on the size of the club. But there are not a huge amount of places going - for a club with 10-150 members, one place is allocated; for a club with more than 350 members, four places are allocated.

What is the world record for a marathon ?

How many calories do you burn running a marathon?

It varies hugely depending on your gender, weight and speed. "You can expect to burn around 100 calories per mile on race day," says Addison. This does vary, as the heavier you are, the more calories you will burn."

The marathon has been around since the modern Olympics started in 1896. It was to commemorate Greek solider Pheidippides. The story goes that in 490BC he ran from Marathon to Athens to deliver news of the Greek army winning a crucial battle.  It's said that he ran 24 to 26 miles without stopping but died promptly afterwards.

After 1896, marathons varied in distance but for the 1908 London Olympics, the 26 mile course was laid out before a decision was made that the finish line should be in front of the royal family's viewing box - and an extra 385 yards was added.