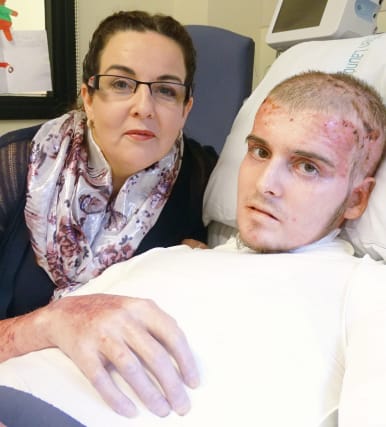 A teenager who suffered extensive burns in a gas explosion just three months ago has been able to leave hospital to see his favourite football club in action.

Kyle Roe defied the odds to survive the blast in his Wiltshire flat last October, which left him with 87% burns.

Family and friends launched a fundraising campaign for the Welsh Centre for Burns and Plastic Surgery at Morriston Hospital, to thank staff who have been caring for Kyle, and have made their first donation.

The 19-year-old has undergone extensive skin grafts, involving 13 separate operations, and is now at the rehabilitation stage.

Although he still has years of treatment ahead of him, he is now able to walk and is regaining strength.

The Tottenham Hotspur supporter was even able to get to the Liberty Stadium to see his club's 2-0 victory over Swansea.

He is waiting to be transferred to Southmead Hospital in Bristol, which is much closer to the family's Chippenham home.

His parents, Tracy and Chris Roe, have been at his bedside for the last 13 weeks and Mrs Roe said Kyle was doing remarkably well considering the extent of his injuries.

"The chances of him surviving were very slim. Nobody thought Kyle was going to survive, if I'm honest," she said.

"He had a cardiac arrest the night he arrived here, and they managed to get him back.

"He's had multiple infections, had to go on dialysis and had ventilator-acquired pneumonia along with acute respiratory disease syndrome.

"He's been through a lot and that's on top of all the surgery he's had just to try and get skin grafts on him - 13 operations.

"He's had to have skin grown in the lab, to be sprayed on to his body, because he didn't have enough skin for his grafting.

"Kyle is fully covered in skin now, and going through the rehab stage.

"He's doing daily physio and occupational therapy, and cream massaging three times per day to manage contractures and tightness of the skin.

"The fact that we're now at this stage 13 weeks on, where he's on his feet and trying to walk, and having physio, is thanks to this hospital and all the staff that have looked after him.

"The standard of care he has received has been truly amazing."

In November, the family - which also includes Kyle's brothers Kallum, 22, Connor, 12, and seven-year-old Findlay - launched a fundraising campaign to say thank you to Morriston Hospital staff.

They set up a Just Giving page which is already close to hitting its £5,000 target.

There has been a big fundraising effort in Chippenham too, including contributions by Kyle's employer Morrisons.

The family will be donating £1,000 to the League of Friends at Morriston while the rest will be going to the Tempest Burns ITU.

Consultant plastic surgeon Sarah Hemington-Gorse said: "Given how unwell Kyle was when he came to us, it's an absolute joy to see him at the point where he's ready to go back to his local hospital."