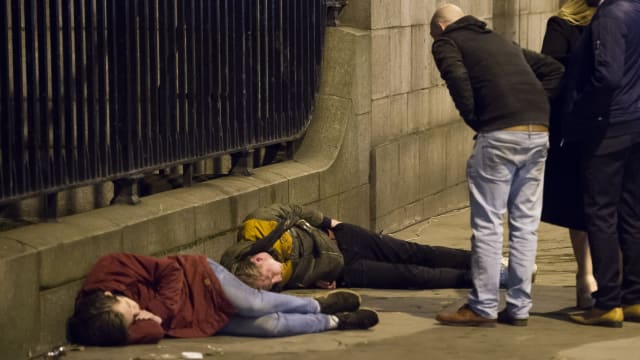 Health bosses will be looking closely at how services cope with alcohol-related incidents this new year as they decide whether to roll out "drunk tanks" to major towns and cities during 2018.

NHS England chief executive Simon Stevens said he wanted to remind revellers that "NHS doesn't stand for 'National Hangover Service'", as he described the huge strain drinking to excess puts on A&E departments and ambulance services during the festive season.

So-called drunk tanks can instead provide a safe place for those who have overindulged to be checked over and even sleep it off, rather than being taken to casualty or the police station.

They are already used in some areas including Newcastle, Bristol and Cardiff.

An estimated 12-15% of attendances at emergency departments in the UK are due to acute alcohol intoxication and this peaks on Friday and Saturday evenings - particularly at this time of year - when as many as 70% of attendances can be alcohol-related.

Mr Stevens said: "When the health service is pulling out all the stops to care for sick and vulnerable patients who rightly and genuinely need our support, it's frankly selfish when ambulance paramedics and A&E nurses have to be diverted to looking after revellers who have overindulged and who just need somewhere to safely sleep it off.

"NHS doesn't stand for 'National Hangover Service', but in the run-up to Christmas, having been out with ambulance crews on night shifts in London and the West Midlands, I've seen first-hand how paramedics and A&Es are being called on to deal with drunk and often aggressive people."

Bristol launched Britain's first mobile drunk tank to treat intoxicated revellers three years ago as a joint venture between the police, ambulance service and hospitals. NHS England said the Alcohol Recovery Centre (ARC) is a state-of-the-art medical facility created to take care of people who have had too much to drink instead of being taken to A&E or police cells.

The Cardiff Alcohol Treatment Centre (ATC) is based in the city centre and is led by a senior A&E nurse with help from other nurses, a paramedic and a police officer, while the North East Ambulance Service and Northumbria Police run a "safe haven" service in Newcastle on Friday and Saturday nights over the Christmas period.

This sees paramedics join police and St John Ambulance workers in a rapid response vehicle based in the city centre, which deals with alcohol and other related incidents.

NHS England said the National Institute for Health Research (NIHR) is also currently carrying out a study looking at whether drunk tanks or Alcohol Intoxication Management Services (AIMS), should be rolled out as a way of managing intoxicated patients.