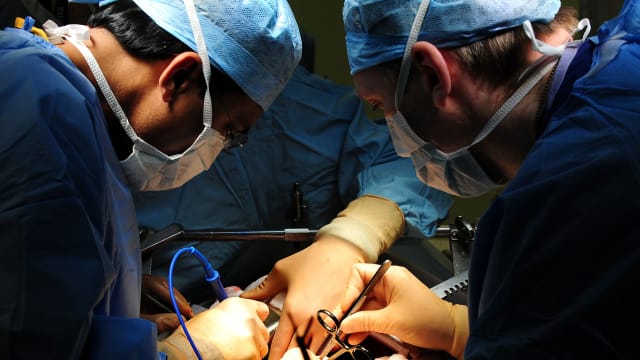 The waiting list for a heart transplant has nearly trebled in a decade, the British Heart Foundation has revealed as it pleads for people listed as donors to discuss their decision with loved ones.

NHS Blood and Transplant service figures show the number of people on the waiting list for a new heart in the UK has increased by 162% since 2008.

The British Heart Foundation (BHF) is encouraging potential donors to make their wishes known to their next of kin, saying while most people support it many families refuse donations because they are unsure of their loved one's wishes.

The campaign marks the 50th anniversary of the world's first heart transplant. On December 3 1967, South African cardiac surgeon Christiaan Barnard transplanted the heart of a woman who died following a car accident to a grocer suffering from heart disease.

The recipient survived 18 days but later succumbed to pneumonia due to the immuno-suppressant drugs he was taking.

Today, such transplants are routine. Patients like Vicky Small, of Bournemouth, desperately want to get the surgery - but the long waiting list sets her in a race against time.

The 43-year-old, who has been diagnosed with restrictive cardiomyopathy, feared she would not get a new heart due to the waiting list.

"It's so sad. And it's also really frightening to think that I might never be lucky enough to receive a new heart because people are not having these uncomfortable, but vital, conversations with their loved ones.

"I am in heart failure and I really need a new heart. Please, let your loved ones know if you want to donate your organs. It's incredibly important you 'have the chat' - before it's too late."

The BHF said many people believed all they had to do to become an organ donor after death was to join the NHS register or carry their donor card - yet they may not know their families are still entitled to bar the procedure.

Despite surveys showing eight in 10 of all adults in England saying they support organ donation, last year the NHS asked 3,144 families to agree to it, but 1,172 of them declined.

"In the last 10 years, with a huge amount of work from many people both within the NHS and outside of the NHS, the number of people donating their organs in death has reached the record number of 1,413," Prof Forsyth said.

"There is still a severe shortage of donated organs of all kinds and far too many people die without ever receiving the transplant they need. Organ donation saves lives and we urge people to join the NHS Organ Donor Register and talk to their families about their decision."

BHF chief executive Simon Gillespie said the surgery once considered "laughably risky" had developed over the last 50 years to become so advanced that hundreds of successful heart transplants are carried out in the UK every year.

"But this is not enough. We need to give those waiting for a new heart the best chance of actually receiving a healthy organ. This will only happen if we start the conversations with our loved ones so that, if the situation arises, they will be able to honour our wishes and save a life."

What Causes a Heart Attack?

Dad shares amazing bond with daughter while styling her hair

Surf’s Pup! This Dog Is a Better Surfer Than You