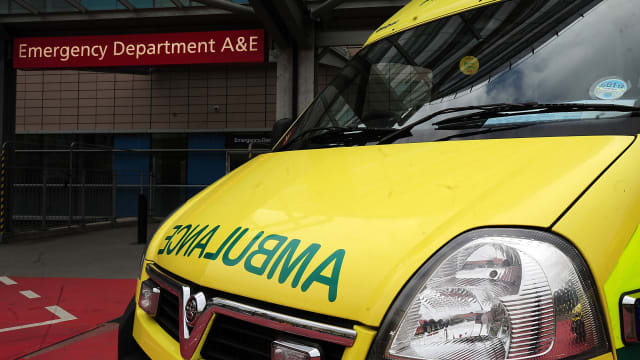 Hospitals could see the worst ever performance for A&E waiting times this winter, a think tank has warned.

The NHS aims to admit or discharge 95% of patients within four hours of arriving in emergency departments.

But analysis by the Health Foundation has predicted the number of patients seen in this time frame could fall to 87% between January and March - which would be the worst quarterly performance since records began in 2004/5.

The charity said that hospitals are now struggling to meet this target all year round, not just in winter when pressures are traditionally worse.

It estimates that, unless the trend of recent years is significantly improved, 735,000 patients will wait longer than four hours at hospitals in England between January and March.

The think tank estimated that the NHS will need at least £360 million extra funding this winter in order to meet this target.

It acknowledged recent moves to reduce the pressures on A&E departments - including an increase in people having the flu vaccine, more 111 calls being handled by clinicians and £100 million of capital investment - but it said that the impact of these measures is not yet known.

But it said that unless the trend of recent years is significantly improved, the health service could potentially see the worst performance against the four-hour target.

Adam Roberts, head of economics at the Health Foundation, said: "With temperatures already dropping, it seems clear that the NHS will be relying on the hard work of its staff to get it through the additional pressures of winter this year.

"There has already been substantial action taken, but unless this significantly improves the trend of recent years, our projections give an idea of how much money it might take for the NHS to deliver what the Government has asked of it.

"This money might not be best spent in hospitals. Another way to increase hospital capacity is to reduce the number of delayed transfers of care, where people are medically fit to leave hospital but can't due to delays arranging packages to support their return home.

"Any additional investment would be welcome for this year, but a long-term plan needs to be developed as soon as possible for next year and those after. Winter is not going away."

The Health Foundation, along with two other health think tanks, The King's Fund and Nuffield Trust, have previously warned that the Chancellor should allocate an additional £4 billion to the NHS next year to stop patient care from deteriorating.

Commenting on the latest analysis, Dr Nick Scriven, president of the Society for Acute Medicine, said: "The NHS has not recovered from last winter and we have a disillusioned workforce being asked to do more with less every day.

"We know there is currently insufficient capacity in the system, with the number of beds decreasing and medically fit patients being unable to be discharged due to a lack of infrastructure.

"We face turmoil if the system comes under pressure as it simply does not have the capacity to sustain and, despite all the talk, there is little progress with any long or medium-terms winter plans despite the same issue occurring. All we see are unsustainable quick fixes."

A Department of Health spokeswoman said: "Thanks to the hard work and dedication of NHS staff, A&E performance has improved and 9 out of 10 people were seen within four hours in A&E in October; more than 60,072 a day.

"Whilst we fully expect the NHS to continue to face pressures as part of winter, the Health Foundation itself points out that the NHS has more robust plans in place than ever before, including an unprecedented system-wide push for all NHS workers to have the flu jab, supported by an extra £100m of additional funding for A&Es and £1bn more funding for social care this year."