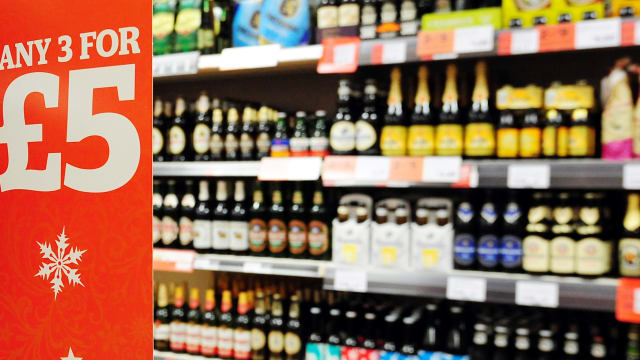 A new law that will introduce a minimum price for the sale of alcohol in Wales has been unveiled by the Welsh Government.

The Public Health (Minimum Price for Alcohol) (Wales) Bill is expected to be introduced before the National Assembly for Wales on Monday by public health minister Rebecca Evans.

It will address long-standing and specific health concerns around the effects of excessive drinking and the availability of cheap, strong alcohol.

It is estimated to lead to 50,000 alcohol-related hospital admissions a year, costing the Welsh NHS £120 million annually. In 2015, there were 463 alcohol-related deaths in Wales.

In Scotland, the Alcohol (Minimum Pricing) Act was passed in June 2012 but has not been introduced as it has been tied up in a succession of court challenges amid claims it breaches European law.

The level of the minimum unit price would be specified in regulations made by Welsh ministers.

In 2014, research on the impact of introducing a 50p minimum unit price estimated there would be 53 fewer deaths and 1,400 fewer hospital admissions in Wales each year, saving the NHS more than £130 million over 20 years. It was estimated workplace absences would fall by up to 10,000 days per year.

Over a 20-year period, the introduction of a minimum unit price could contribute £882 million to the Welsh economy in terms of the reduction in alcohol-related illness, crime and workplace absence.

:: A formula for calculating the applicable minimum price for alcohol using the percentage strength of the alcohol, its volume and the minimum unit price;

:: To establish a local authority-led enforcement regime with powers of entry, powers to bring prosecutions for offences and to issue fixed penalty notices.

Ms Evans said: "Alcohol-related harm is a significant public health problem in Wales. The 463 alcohol-attributable deaths in 2015 were all avoidable, and each of these deaths would have had a devastating effect on the person's family and friends.

"Alcohol-related harm also has a big impact on public services such as the NHS. There is a very clear and direct link between levels of excessive drinking and the availability of cheap alcohol. So, we need to take decisive action now to address the affordability of alcohol, as part of wider efforts to tackle alcohol-related harm.

"The Bill I am unveiling today will tackle excessive alcohol consumption by making it an offence for retailers to sell strong alcohol at low prices. It will make an important contribution to improving health outcomes, by putting prevention and early intervention at the heart of our efforts to reduce alcohol-related harm. This will undoubtedly help save lives."

"Increasing the price of alcohol through the introduction of a minimum unit price provides us with an effective and efficient way of reducing excessive alcohol consumption and alcohol-related harm.

"It will have a small impact on moderate drinkers. The most substantial effects will be experienced by harmful and hazardous drinkers, who are more likely to consume cheaper and higher strength alcohol products."

What Causes a Heart Attack?

Dad shares amazing bond with daughter while styling her hair

Surf’s Pup! This Dog Is a Better Surfer Than You